Increasing numbers of national security leaders of the likes of Brent Scowcroft and George Shultz have said that the US embargo of Cuba makes no sense and harms American interests.
Republican Congressman Jeff Flake — the hunky Arizona Congressman who recently spent five days alone on a remote Pacific island — has reminded Americans that it is COMMUNIST governments that are supposed to get a kick out of restricting the movements of its people — not DEMOCRATIC governments. Congressman Bill Delahunt has been leading in the House along with Byron Dorgan in the US Senate in calling for an end to all travel restrictions on Americans.
President Obama himself is a believer in people to people exchange — and that opportunities arise from engagement — not from isolation.
And yet, the United States today is going to vote in the United Nations against a measure condemning the US embargo of Cuba.
But the United Kingdom, France, Australia, China, Canada, Mexico, Brazil, Germany, Japan (yes. . .even Japan!!), Poland, Iceland — about 185 nations give or take a few — will vote AGAINST THE UNITED STATES position.
Israel and a couple of island nations will vote with the United States. The Israel vote is amusing as Israel votes with the US but turns a blind eye to Israeli firms operating Cuban citrus franchises inside Cuba.
Represenative Jim McGovern (D-MA) has a great suggestion for US Ambassador to the United Nations — just say “abstain.”
Clever idea — and would signal the possibility of change without going further than the White House incrementalists want to go.
Won’t happen — but darn good idea.
Here is the pdf of McGovern’s thoughtful and constructive letter.
The text reads: 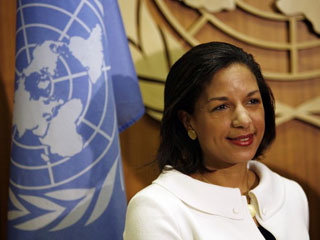 23 October 2009
Ambassador Susan E. Rice
U.S. Representative to the United Nations
U.S. Mission to the United Nations
140 East 45th Street
New York, NY 10017
Dear Ambassador Rice:
As you are aware, on Wednesday, October 28th, the United Nations will once again take up the annual resolution calling for an end to the embargo against Cuba. Judging from years past, the UN General Assembly will cast a near unanimous vote in favor of the resolution, with very few members opposing the resolution, including the United States.
I am writing to suggest an alternative: for the United States to abstain.
I do not make this suggestion lightly, but rather to use what has, in general, been a moment to castigate or mock U.S. policy towards Cuba and Latin America as an opportunity to signal that the United States is considering all options in how it will conduct its relations with Cuba in the coming years. Such an action — and explanation — would only reinforce the statements already made by the President and the Secretary of State: that the door is open to mutual cooperation, confidence-building, and more. It would also signal to the rest of the hemisphere that the United States has indeed listened to the voices of Latin America, as expressed earlier this year at the Summit of the Americas and at the first general assembly meeting of the Organization of American States (OAS), and is responsive ans sensitive to the concerns raised regarding U.S. policy and posture towards Cuba.
Finally, it would signal to the Cuban government and its people that if they enter into a process of mutual regard and cooperation, the United States is serious about changing its posture over time towards the island.
I realize that even abstaining on this vote is a radical departure from past policy — but I believe that’s exactly what is needed at this current moment in history. We can take advantage of the opportunity provided by this annual debate and vote to underscore and emphasize in concrete terms for the international community the open-minded review of US-Cuba policy that the President and his foreign policy teach are currently undertaking.
I urge the most serious consideration of this suggestion, and I would be happy to discuss it further with you prior to the October 28th vote.
Sincerely,
James P. McGovern
Member of Congress
cc: Hillary Rodham Clinton, Secretary of State
Thomas A. Shannon, Assistant Secretary of State for Western Hemisphere Affairs

US vs THE WORLD on CUBA
Hagel and Boren Announcement

One comment on “CUBA United Nations Vote Today: US Should Abstain”