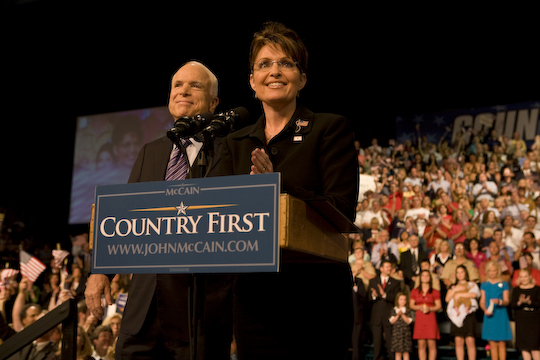 John McCain’s decision to choose Alaska Governor Sarah Palin to run with him on the GOP ticket can be about many things — wanting to bring in someone genuinely from the outside, wanting to embrace the reality that women can serve in all capacities and in all levels of government and the military, wanting to lure part of the female vote that might have supported Hillary Rodham Clinton towards John McCain.
But the national-security dripping “Country First” sloganeering that McCain has been doing just does not fit with Sara Palin.
This was a “Country Last” decision. If McCain had something happen to him, I just don’t know what the country would do.
We would be faced with a scary situation in which many major institutions in our nation — and you probably know at least part of what I’m talking about — might not support her ascension to the presidency. We have to consider the implications of that.
I can’t prove that the government would divide if she were to move from VP to the presidency, but I know that there would be enormous tension. I think we’d see mass resignations.
Sarah Palin is not Hillary Rodham Clinton. She is not Condoleezza Rice. She isn’t Kathleen Sibelius or Olympia Snowe or Janet Napolitano. She’s not Susan Eisenhower or Dianne Feinstein.
Alaskans typically devour their governors. They usually serve a single term before the tectonics of state politics undermine their state leader. But she hasn’t even served two years as governor.
What does she think about Cuba? Does she know the difference between America’s relations with Brazil and Venezuela? Does she know what a balancing act we are walking in Asia between Japan, Taiwan, China, South Korea, North Korea, Russia and more? Does she know anything about nuclear weapons and our defense posture?
What books has she read? Who are her inspirations as thought leaders? Has she written any serious articles or published anything we might see to get a sense of who she is?
What would she do with Iran? Can she name even five nations on the continent of Africa?
She better study up. Because as she begins to have her national coming out — forget the reporters. . .regular people are going to kick her tires about this stuff.
And no one I know thinks she is ready for a serious challenge like this — and certainly not ready to manage the crises that might come if she tripped into the presidency.
— Steve Clemons

What Does It Mean When. . .James Steinberg Painted His House in March?
Is Wasserman Shultz Strangling Miami Dem Candidate Joe Garcia — or Hugging Him?