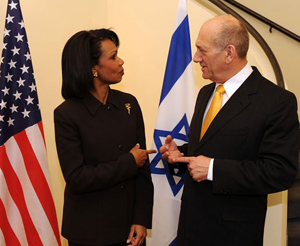 A lot of Middle East watchers have been stunned by Prime Minister Ehud Olmert’s snotty depiction of both Secretary of State Condoleezza Rice and President Bush with regard to UN Security Council Resolution 1860 calling for a ceasefire between Israel and Hamas.
While the US abstained when the vote was taken, Ambassador Zalmay Khalilzad told me today that the US does support the resolution and only had some minor concerns about the timing of the vote.
My colleague and New America Foundation/Middle East Task Force co-director Daniel Levy and UN Dispatch‘s Mark Goldberg both have more on this, but the exchange below today with Secretary Rice shows that she knows how to manage the optics of this diplomatic tiff with Olmert. Nonetheless, she calls his understanding of events related to the ceasefire resolution “fiction.”
Khalilzad also told me that Condoleezza Rice stayed an unprecedented three days in New York working hard with other stakeholders on all sides of the ceasefire resolution and negotiating with key players directly.
The exchange from a press interview between Rice and Bloomberg’s Mike Schneider:

QUESTION: Back once again with the Secretary of State Condoleezza Rice in her last few days here at the State Department. We saw newspaper headlines which have surprised, shocked, and disturbed many people, remarks made purportedly by the prime minister of Israel, ostensibly made in the southern part of the country saying that he was unhappy about the direction the U.S. was going to take regarding a resolution in the Security Council, and that he called up the U.S. and said he didn’t want to speak with you, he wanted to speak with the President. He interrupted a President’s speech, he got him on the phone, and basically ordered that we not follow through on a course that you wanted to follow through on, according to him, in the Security Council regarding a resolution on what’s happening in Gaza. How much of that is true?
SECRETARY RICE: Well, first of all, I don’t know if the prime minister was – I hope – quoted out of context, because the story that I read in the newspaper is fiction.
QUESTION: You had – what did you want to do with that resolution? We abstained.
SECRETARY RICE: The President and I talked about the resolution, about the importance of allowing the Council to send a signal even though the United States believed that the resolution was premature. And I had made very clear that I thought the resolution was premature, and there were also concerns about a resolution that had Israel, a member-state of the United Nations, and Hamas, which is a terrorist organization, you don’t ever want there to be any equating those two.
And so we talked. We talked about abstention as a good option. And I was quite aware of the President’s call to Prime Minister Olmert. Of course, Prime Minister Olmert is not at all aware of what the President said to me. And I repeat, his rendering of this is fiction – if, in fact, that was his rendering of it. And I want to give him the benefit of the doubt. Perhaps it’s not exactly what he said.
QUESTION: Well, you also find yourself being criticized by former Ambassador Bolton, who said that the U.S. should veto —
SECRETARY RICE: There’s not much new in that, Mike. (Laughter.)

I hope to have my 90 minute public discussion with Ambassador Zalmay Khalilzad which includes some important exchanges on Afghanistan, Iran, nation building, the United Nations as an institution, and on the Israel-Palestine part of America’s Middle East challenges posted soon.
— Steve Clemons