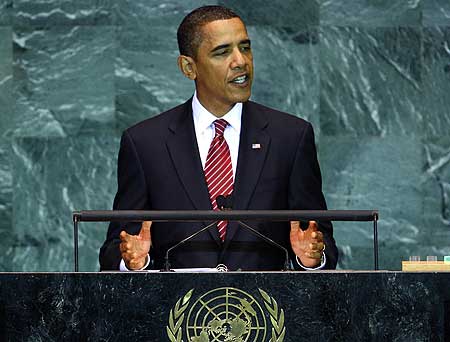 Below follows the lead from a piece I just wrote for CNN on Barack Obama winning the Nobel Peace Prize. An interesting tidbit that I learned from a TWN reader — though I’m not sure it’s accurate — is that Nobel Prize nominations were due by February 1st — thus just nine days after Barack Obama’s Inauguration.
Even if true, the Nobel Prize committee chose shrewdly in my view.
Here is the intro to my CNN comment:

WASHINGTON (CNN) — Cynics will say that Oslo was jealous that Copenhagen, Denmark, scored a visit from President Obama, and giving him a Nobel was the only way to get him to Norway.
But the Nobel Committee’s decision to make Obama the only sitting U.S. president since Woodrow Wilson to receive the Nobel Peace Prize shows the committee’s clear-headed assessment that Obama’s “unclenched fist” approach to dealing with the world’s most thuggish leaders has had a constructive, systemic impact on the world’s expectations of itself.
Obama has helped citizens all around the world — including in the United States — to want a world beyond the mess we have today in the Middle East and South Asia. They want a world where America is benign and positive, and where other leaders help in supporting the struggles of their people for better lives rather than securing themselves through crude power.
Obama has found a way in this interconnected world of cell phones, Twitter, Facebook and other social networking to reach a majority of the world’s citizens with his message of hope for a better world. He speaks past the dictators to regular people and has, on the whole, raised global political expectations about everything from climate change to nuclear nonproliferation in ways that no one in history has done before.