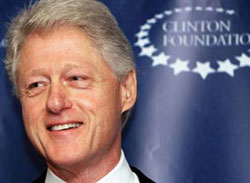 I was notified this morning that the Clinton Foundation had posted on its website its roster of donors.
Good luck looking to it and through it — which I did at length in the first few minutes after receiving the email.
But ever since, the Clinton Foundation site has been crashing. Tons of traffic.
Here is the release from the Foundation:

For Immediate Release
Contact: Clinton Foundation Press Office
December 18, 2008
William J. Clinton Foundation Publishes Names of All Contributors on Foundation Website
Foundation provides the names of all contributors since its inception in 1997
New York – The William J. Clinton Foundation today published its list of all contributors since its inception in 1997, with gratitude for the contributions they have made to sustain the work of the Foundation and its charitable initiatives.
The seven initiatives include: the Clinton HIV/AIDS Initiative, the Clinton Global Initiative, the Clinton Climate Initiative, the Clinton Hunter Development Initiative, the Clinton Giustra Sustainable Growth Initiative, the Clinton Economic Opportunity Initiative, and the Alliance for a Healthier Generation. The Foundation also funded the construction of the Clinton Presidential Library in Little Rock, Arkansas, which was turned over to the people and government of the United States in November, 2004.
“I want to personally express my deepest appreciation to our many contributors, who remain steadfast partners in our work to impact the lives of so many around the world in measurable and meaningful ways.” said President Clinton. “We have just begun and it is an honor and privilege to be on this journey alongside each and every person who is committed to our foundation’s ongoing charitable mission.”
The Clinton Foundation has received contributions of all sizes, from people of all means. The median gift amount over the life of the Foundation is $45. Nearly 90% of gifts (179,000 contributors) are valued at $250 or below, with 12,000 individuals contributing $10 or less. In addition, in a sign of the significance of the cause and the effectiveness of the work, a noteworthy 57,000 contributors gave more than once to the Foundation and/or the Bush-Clinton Katrina Fund.
All contributions to the Foundation make possible the following charitable work:
~ Help 1.4 million people living with HIV/AIDS get the medicines they need to survive;
~ Secure over 1,200 “Commitments to Action” valued at $46 billion – addressing our most pressing global challenges, including poverty alleviation, climate change, global health, and education – improving more than 200 million lives in 150 countries;
~ Engage the 40 largest cities to take concrete steps in reducing their greenhouse gas emissions;
~ Work with nearly 3,000 schools and more than 1.66 million students to promote healthier educational environments and healthier lifestyles;
~ Enable sustainable economic growth, and develop programs to strengthen child nutrition and expand access to health care in Latin America;
~ Assist the governments in Rwanda and Malawi to strengthen farming, water, and sanitation, and healthcare in areas of most need;
~ Work with President Bush toward rebuild and recover efforts in the Gulf Coast region, through the Bush-Clinton Katrina Fund, in the aftermath of Hurricane Katrina;
~ Help to expand economic opportunity for domestic businesses by increasing access to low-cost financial services and empowering entrepreneurs through business-to-business mentoring.
“We are proud to have involved so many people in our work,” said Bruce Lindsey, CEO, William J. Clinton Foundation. “We are grateful for the support of individuals, businesses, governments and NGOs over the past decade. Their passion and commitment inspires us, and together we will continue to make a real difference in the lives of people around the world.”
The list of contributors is published today on the Foundation’s website, www.clintonfoundation.org/contributors