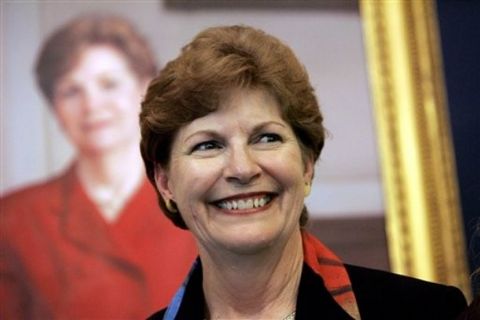 The CBS News Political Hotsheet has lost track of Jeanne Shaheen.
In a brief offered by CBS’ Michelle Levi on the shuffling that would take place if Senator Judd Gregg (R-NH) became Secretary of Commerce, she wrote:

Senate Minority Leader Mitch McConnell (R-KY) said he is confident the expected appointment of Republican Senator Judd Gregg (R-NY) as Secretary of Commerce would “have no impact on the [Senate’s] balance of power,” on “Face the Nation” this morning.
“Senator Gregg has assured me that if this were to happen it would not change the make up of the Senate,” Mr. McConnell told Bob Schieffer. “Whoever is appointed to replace him would caucus with the Republicans.”
New Hampshire’s Democratic Governor Jeanne Shaheen, in this scenario, would have to appoint a Republican replacement. Pushed by Schieffer whether this will definitely be the case, McConnell reiterated that Senator Gregg told him his appointment would “not alter the make up of the Senate in terms of the majority and the minority.”

Only problem is that John Lynch is Governor of New Hampshire, and Jeanne Shaheen is now a US Senator.
Time for CBS to update that rolodex.
Just trying to help. . .
— Steve Clemons