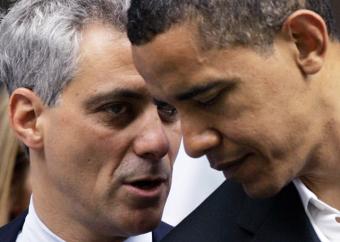 It’s always wise to read up on what one’s supposed global and ideological rivals are writing and thinking.
Along this line, for example, I think that reading Karim Sadjadpour‘s fascinating expose on Iran Supreme Leader Ayatollah Ali Khamenei is essential reading. Sadjadpour guides us through and gives us context for things that Khamenei has actually said and written himself.
And then there are Fidel Castro’s ruminations which I often find provocative, intriguingly complex, sometimes wandering, but still interesting to see a leader that has survived ten American presidents wrestling with ideas and sending his missives out to the public.
I received this morning Fidel Castro’s reflections on “Rahm Emanuel” which the former Cuban president drafted on February 8th.
I won’t set any context — other than to say that I find his positive reference of economist John Kenneth Galbraith intriguing. Galbraith’s son, a colleague of the next Deputy Secretary of State James Steinberg at UT Austin, is author of the critically acclaimed and well-selling Predator State: How Conservatives Abandoned the Free Market and Liberals Should Too.
Castro’s comments on the contradictions of capitalism are not particularly new — just this time he might be on to something. That’s perhaps how the law of averages works.
I will post a link to the Spanish — but then reprint the English translation here:

Reflections by comrade Fidel
RAHM EMANUEL
What a strange name! It is easy to pronounce and it sounds as if it were Spanish but it is not. Among tens of thousands of names I have read of students and compatriots and people I have met in my life, I have never heard that name before.
Where does it come from? I thought. Once and again, the name of Inmanuel Kant, the most brilliant German thinker, came to my mind. Kant, with Aristotle and Plato made up the trio of philosophers with the greatest influence on the human thought. As I would learn later, this was not far from the philosophy of the man closest to Barack Obama, the current President of the United States.
Another recent possibility led me to reflect on the strange name. This time it was the book by German Sanchez, Cuban ambassador to the Bolivarian Venezuela, entitled “La transparencia de Enmanuel”, although in this case the name was written without the letter “I”, the first in the name of the German philosopher.
Emmanuel is the name of the child conceived and born in the thick forest occupied by the guerrilla, where his very worthy mother Clara Rojas Gonzalez became a prisoner on February 23, 2002. She had been a candidate to vice-president of Colombia in the same ticket with Ingrid Betancourt who was running for the presidency of that sister nation in the election to be held that same year.
I had read with great interest the above mentioned book by German Sanchez, our ambassador to the Bolivarian Republic of Venezuela, who had the privilege of taking part in 2008 in the release of Clara Rojas an Consuelo Gonzalez, former deputy to the National Assembly for the FARC, the revolutionary army of Colombia, which made them prisoners.
Clara had stayed with the guerrilla in solidarity with Ingrid whom she accompanied in her six years of captivity.
German’s book is entitled “La transparencia de Enmanuel”, almost exactly the name of the German philosopher. I was not surprised the mother had given such a name to her child for she is a talented and learned attorney. It simply made me recall my years of imprisonment in solitary confinement due to the almost successful assault on the second military fortress in Cuba on July 26, 1953 to seize thousands of weapons with a selected group of 120 combatants willing to fight against the Batista’s tyranny imposed on Cuba by the United States.
Of course, that was not the only objective or the only idea in which we found inspiration, but the truth is that after the victory of the revolution in our homeland on January 1st, 1959, I still remembered some of the German philosopher’s aphorisms:
“The wise man can change his opinion; the fool never does.”
“Do not treat others as a mean to attain your objectives.”
“A man can only grow to be a man through education.”
This idea was one of the principles proclaimed since the first days of the revolutionary victory of January 1st, 1959. Obama and his advisor had not been born; they had not even been conceived.
Rahm Emanuel was born in Chicago on November 29, 1959, to an immigrant of Russian descent. His mother Martha Smulevitz, an advocate of civil rights, was sent to prison three times for her activities.
Rahm Emanuel joined the Israeli Army as a volunteer in 1991, during the first Golf War unleashed by Bush, sr., using uranium- loaded rockets that caused serious illnesses among the U.S. troops taking part in the offensive on the retreating Iraqi Republican Guard and among an incalculable number of civilians.
Ever since that war, the peoples of the Near and Middle East have become consumers of enormous amounts of armament placed in the market by the U.S. industrial military complex.
If the extreme right racists were able to quench their thirst for ethnic superiority and assassinate Obama as they did Martin Luther King, a great human rights leader, which is theoretically possible, although it does not seem likely at the moment given the protection provided to the President every minute of the day and night after his election.
Obama, Emanuel and all of the talented politicians and economists they have brought together would not suffice to solve the growing problems of the American capitalist society.
Even if Kant, Plato and Aristotle were resurrected together with the late brilliant economist John Kenneth Galbraith, they would neither be capable of solving the more frequent and deeper antagonistic contradictions of the system. They would have been happy in the days of Abraham Lincoln, so much admired, and rightly so, by the new President; but those days are now far behind.
All the rest of the peoples will have to pay for the huge waste and ensure, first of all on an increasingly contaminated planet, the American jobs and the profits of that country’s big transnational.
Fidel Castro Ruz
February 8, 2009
5:16 p.m.