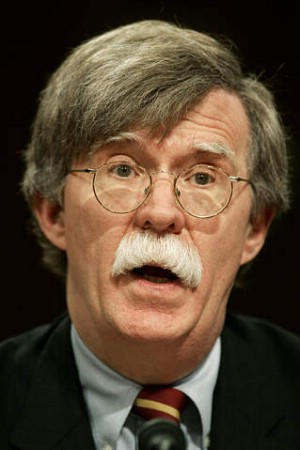 First, in this National Journal interview, John Bolton slams Barack Obama, arguing that negotiation is not a policy but rather a technique. Yet, most of the interview is dedicated to defending the pre-2006 Bush approach of non-negotiation as policy.
Then, Bolton is asked about Israel’s recent decision to negotiate with Syria. Here’s his surprising response:

I think they are making a mistake trying to negotiate with Syria now, because I don’t think Syria has any independent ability to make decisions. Over the past several years, Syria has become functionally a satellite of Iran, so that if the Israelis really wanted to negotiate with somebody, they ought to be in Tehran, not in Damascus. They are not talking to those capitals. I think it’s a mistake on their part.

Is there any way to reconcile that statement with Bolton’s oft-repeated position that negotiating with Iran is futile and dangerous? If there is, I don’t see it.
— Scott Paul

27 comments on “Bolton: Israel Should Negotiate With Iran”