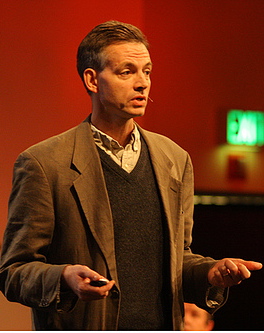 My colleague and friend Robert Wright, who is now launching The Progressive Realist, kind of comes off in person as a hybrid of Anthony Perkins and Garrison Keillor — but focused in a folksy but serious way on America’s as of late unenlightened and reckless foreign policy course. When you push Bob to the edge as I have now and then, he’s capable of a Dick Cheney-like posture and growl.
We were out fishing for bass one day at the Airlie Conference Center, and he just wasn’t catching anything. I can’t help it if someone who sounds like they should be able to fish just can’t. I kept reeling in the decent sized bass and chose not to feel guilty. Actually just before the Cheney-esque growl Bob gave me that day some years ago, we had just been in a session together where Bob was outlining quite brilliantly the “increasing lethality of hatred” — sort of along the lines of Bill Joy’s dystopic look at a bleak future for mankind in which small groups of people had greater capacity to create events that had mass impact.
I was thinking then about how the foreign policy course America had taken had ruptured the mystique of American power in the world, and that the nation was well on its way to seeing its power and position implode. The economic panel that followed us saw the future as quite rosy, no trouble on the horizon — and I couldn’t quite believe that some of the leading economic minds in the country didn’t recognize that at some point there would be a point of tragic but necessary arbitrage between the world’s geostrategic mess and the global economic picture.
Bob and I were on the same side — but we both felt like growling.
Beyond the folksy veneer though, Robert Wright is one of our nation’s leading public intellectuals and entrepreneurs — and TOMORROW, he is launching a new “meta-blog” called The Progressive Realist.
If you have never checked it out before, take a look at the Bloggingheads beach spot inside the New York Times web universe. Some great exchanges there, frequently.
I heartily subscribe to several versions of realism, particularly progressive realism – but also subscribe to Anatol Lieven’s depiction of “ethical realism” and Michael Lind’s essays on “American internationalism.”
Robert Wright also launched the very successful BloggingHeads.tv and is author of Non Zero: The Logic of Human Destiny — as well as a Senior Fellow at the New America Foundation.
The Washington Note will be one of the feeds into Wright’s new portal into progressive realism, and we wish Bob and his team great success and many avid visitors.
— Steve Clemons