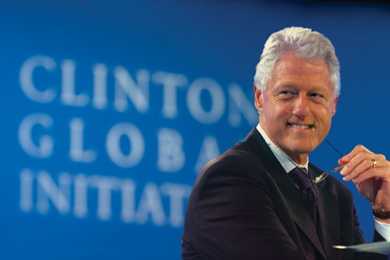 After a very long security sweep of the Sheraton Hotel & Towers conference space, I finally made my way in to get credentialed for the Clinton Global Initiative, opening this afternoon with a powerhouse panel chaired by the 42nd President of the United States, Bill Clinton.
At the opening of this policy-star studded event, Clinton will host a powerhouse panel of the 44th President of the United States Barack Obama; Chile President Michelle Bachelet; Australia Prime Minister Kevin Rudd, Wal-Mart Stores President & CEO Mike Duke; and Coca-Cola CEO Muhtar Kent.
The schedule lists Obama first — then Clinton, offering deference to the incumbent — but it also looks like Obama will actually participate in a panel format. I won’t fully believe that until I see it — but if Obama did sit up there with these other global leaders and CEOs, that would be a gesture of creative humility. Though it begs the next question of why corporate CEOs only? Could we not have had a major labor federation chief on stage, or an NGO that was also working hard to sculpt the world into a better place?
Coke. Wal-Mart. Obama.
I should stop nit-picking. It’s not President Obama’s conference. But a labor leader would have been good.
We have three hours yet — perhaps they’ll add someone?
Putting criticism of the veneer of things aside, I think Bill Clinton’s conference has become ground zero for much of the global problems industry. Key global private sector and public leaders struggling with global health, education, energy and climate change, female trafficking, economic empowerment, post-conflict social investment, and more and more are here — and I think President Clinton should be applauded for continuing to underscore the importance of issues that are vital but not always at the top of the news cycle or American consciousness.
If this annual Clinton issues gala didn’t exist — someone would have to invent it, but no one else would have the rolodex and draw. It’s impressive.
I’ll be covering the opening plenary which I’m eager for. Australia Prime Minister Kevin Rudd is one of my favorite global leaders not only for his taste in RJ Williams boots but because he is a complex global strategist — one of the few I think who could rival Bill Clinton’s understanding of complex international affairs in both their economic and political/security dimensions.
For those interested in the Obama-Clinton-Rudd panel with Chilean President Michelle Bachelet and the CEOs of Wal-Mart and Coca-Cola, a webcast will be available here after 4 pm EST.
More later.
— Steve Clemons

7 comments on “Bill Clinton: CEO of the Global Problems Industry”