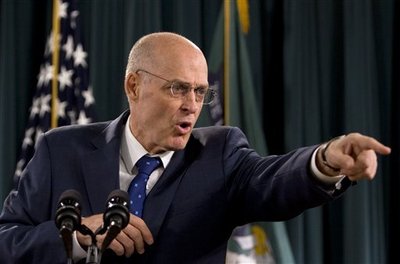 I spoke to former World Bank Chief Economist and Initiative for Policy Dialogue President Joseph Stiglitz on Saturday by phone, and he shared with me many of the same points that he does in this excellent article, “A Better Bailout,” on how we needed to structure a financial markets action plan.
He shared a number of concerns with me about the administration’s approach to the financial crisis — but the biggest concern he had was that Paulson was trying to stick the U.S. taxpayer with all of the consequences of Wall Street’s recklessness and give financial firms squeaky clean portfolios that they could then float up — again taking huge financial gains for themselves.
From his piece:

The administration is once again holding a gun at our head, saying, “My way or the highway.” We have been bamboozled before by this tactic. We should not let it happen to us again. There are alternatives. Warren Buffet showed the way, in providing equity to Goldman Sachs.
The Scandinavian countries showed the way, almost two decades ago. By issuing preferred shares with warrants (options), one reduces the public’s downside risk and insures that they participate in some of the upside potential. This approach is not only proven, it provides both incentives and wherewithal to resume lending. It furthermore avoids the hopeless task of trying to value millions of complex mortgages and even more complex products in which they are embedded, and it deals with the “lemons” problem – the government getting stuck with the worst or most overpriced assets.
Finally, we need to impose a special financial sector tax to pay for the bailouts conducted so far. We also need to create a reserve fund so that poor taxpayers won’t have to be called upon again to finance Wall Street’s foolishness.
If we design the right bailout, it won’t lead to an increase in our long-term debt – we might even make a profit. But if we implement the wrong strategy, there is a serious risk that our national debt – already overburdened from a failed war and eight years of fiscal profligacy – will soar, and future living standards will be compromised.
The president seemed to think that his new shell game will arrest the decline in house prices, and we won’t be faced holding a lot of bad mortgages. I hope he’s right, but I wouldn’t count on it: it’s not what most housing experts say. The president’s economic credentials are hardly stellar. Our national debt has already climbed from $5.7 trillion to over $9 trillion in eight years, and the deficits for 2008 and 2009 – not including the bailouts – are expected to reach new heights. There is no such thing as a free war – and no such thing as a free bailout. The bill will be paid, in one way or another.
Perhaps by the time this article is published, the administration and Congress will have reached an agreement. No politician wants to be accused of being responsible for the next Great Depression by blocking key legislation. By all accounts, the compromise will be far better than the bill originally proposed by Paulson but still far short of what I have outlined should be done.
No one expects them to address the underlying causes of the problem: the spirit of excessive deregulation that the Bush Administration so promoted. Almost surely, there will be plenty of work to be done by the next president and the next Congress. It would be better if we got it right the first time, but that is expecting too much of this president and his administration.

The bailout proposal which House Speaker Nancy Pelosi is calling a “buy-in” plan is better than the first Paulson plan.
I haven’t reviewed all of the details, but I do know that the U.S. government receives warrants in the firms in which it is supporting, which allows participation in the upside that these firms will get by the U.S. accepting the risk of the toxic mortgage portfolios held by financial institutions. CEOs that get bailed-out have compensation caps of $500,000. It’s strange to think that is a healthy number — but on a relative basis I guess it is.
Here are some of the provisions of the plan and a summary in pdf form. (section by section analysis and separately, a summary)
I haven’t been able to deduce whether the “encouragement” of the U.S. to financial institutions and mortgage holders to keep people in their homes during this mess is only encouragement — or whether there is some hard edge to this. Others may want to comment on this aspect.
I feel that Wesley Clark was right when he told me that we have to stop the deterioration of neighborhoods that has come with the rampant foreclosures — and have to give families who are the victims in this crisis as much time as the banks and financial institutions to stabilize and see if their “own life portfolios” can float upward with time.
— Steve Clemons

Mozart Rave and a Drink
Taxi to The Dark Side to Run on HBO, Monday 9 pm