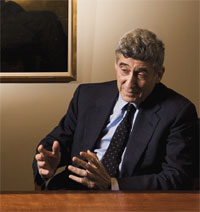 Former IBM top technologist and Sloan Foundation President emeritus Ralph Gomory has a provocative think-piece up at Huffington Post today titled “Autopia: A Tale of Two Bailouts.”
The piece is intriguing because Gomory casts winners, losers, and the narrative of the financial and auto bailouts at a distance — as if it were all unfolding on a distant planet.
Here is a chunk of the essay, but it’s worth reading the entire thing — and asking ourselves what part of the social contract with workers and firms and capital we want to proactively change in this era of bailouts so as to get out of the bleakness of Autopia:

Once upon a time on a distant planet there was a nation that looked a lot like ours — we’ll call it Autopia. They were indeed much like us, only with some things backwards. Autopia’s car companies looked and acted like our Wall Street, while Autopia’s financial companies acted a lot like our car companies.
In Autopia, the car industry did just fine for many years. It was a good industry and many people worked hard and got reasonably wealthy. But then a fundamental change of viewpoint took over the entire nation. This new and pervasive viewpoint dictated that all companies and this included the auto companies, had only one goal: To earn as much profit as possible. To a very large extent the companies came to care less about product quality, the fate of the middle class, and the overall state of the country. Instead it became accepted and even mandatory to measure everything solely based on profit. Elaborate rationales were invented that justified this new profit-centric doctrine and argued that maximizing the profit margins of the various companies benefitted all people throughout the nation.
This was the setting when HCG arrived. For a very long time cars in Autopia had been constructed out of metals and high-grade plastics. But with the introduction of this new material that the Autopians called HCG, everything changed. HCG was short for Highly Compressed Garbage. Highly Compressed Garbage was created by taking ordinary household garbage, condensing it in a high pressure compressor, and spray painting it. It looked and felt like metal and it was cheap, cheap, cheap. It really paid to introduce HCG into cars.
No one knew if HCG would hold up over time, but that was beside the point. HCG was cheap, and the cheaper the product, the higher the profit. Once the trend started, everyone had to join in or be left behind in the race for the only thing that mattered – profits.
There were a few truly golden years. Profits at the car companies soared to unprecedented heights. There were individuals who made a billion Autopian dollars in a year. The stock prices of the car companies soared, and very few people even noticed that all this wealth and happiness was based on an investment in garbage.
But after a while, bad news started to trickle in. A few HCG cars had started to fall apart, then a few more. This was ignored at first, but the trickle of failures soon became a stream, and the stream became a torrent. Soon all around Autopia, and in countries to which they exported, HCG cars were falling apart, and no one knew which cars would be next. Cars were collapsing and people were being stranded everywhere. Even the tow trucks sent to rescue them often broke down and joined the list of stranded vehicles.
Now you might think this would lead to a disaster for the car companies in Autopia, but fortunately for them, while they had been unwise with HCG, they had acted wisely in a political direction. Car companies always had considerable political influence in Autopia, but during the golden years their influence became immense. All major political parties vied for their contributions and were extremely responsive to lobbying from the car companies. As a result of this quid-pro-quo, many of the corporate beneficiaries of the use of HCG paid little tax. A car company executive even served as Secretary of the Autopian Treasury. So when the HCG crisis hit, the political investments of the good years turned to solid gold.
True, there were some hesitations before the government poured an unprecedented flood of money into the car companies. After all, profit was believed to be the only thing that mattered and the car companies were losing money and collapsing at an unprecedented rate, faster than any other industry ever. But the need for new solid cars to replace the old ones was too urgent. It was pointed out that the world might well come to a stop if there was not a flood of new money that would enable a fresh start, and this fear overcame even the doctrine of profits. The flood of money came, without strings. There was no change required in the way the industry worked; they didn’t have to give up their high compensation or buy back the broken garbage cars. After all, they had shown they could be profitable.
This treatment contrasts strikingly with the way the Autopian government handled another down-on-its-luck industry. Autopia’s financial companies had all kinds of problems, which started years back. Before profits became the only thing that mattered, and in a less competitive world, the financial companies had made share-the-wealth arrangements with their unionized workers. They had relaxed and become complacent. Foreign companies caught up with and surpassed their services. When they struggled back and provided competitive services, they were handicapped by the binding promises they had made to their workforce–promises that were no longer being made in the new profit-oriented world, and which their new competitors never had to make — and by the bad reputation they had with the many who used their services in the days before their services improved.