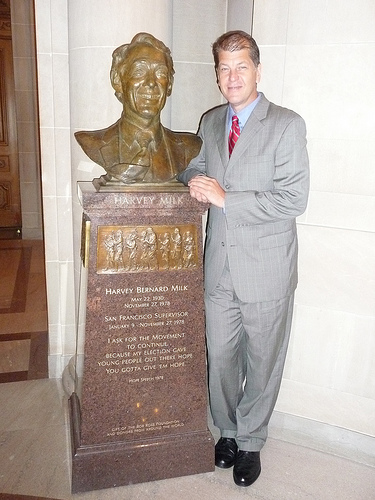 I got married to my partner of 17 years in San Francisco on August 18th of this year. We did so under the beautiful dome of San Francisco’s magnificent City Hall — and I had my picture taken (above) with Harvey Milk’s statue. It was a powerful package for me — paying a fee to the City for a contract that finally said that my partner and I had the rights and responsibilities of other married couples. We met others that day — gay and straight couples — who got married about the same time we did on those City Hall steps.
I don’t often delve into the deeply personal in my blogging commentary — although foreign policy, getting national security decisions right or wrong, economic frameworks that turn the wrong stakeholders into losers rather than winners are all personal matters for me. But this year the fear and bigotry that animated Proposition 8 in California has made this a strange Thanksgiving.
Yes, like everyone — I’m pleased that Barack Obama won the White House. But it is only a small beginning in the right direction. But with Barack Obama, we also got Proposition 8. We have him talking about Iraq as the “bad war” and Afghanistan as the “good war”. We have political appointments in both security and economic policy that either will be the height of brilliant personnel and policy maneuvering or alternatively could end up as a paralyzed cabinet and government disaster. There is only fog ahead, much yet we don’t know.
We have wars going on in the Middle East that shouldn’t be going on. I have friends there now being shot at — and helping to kill others — and this wasn’t what the 21st century was supposed to be about.
I have been writing here for some time — far before the National Intelligence Council’s Global Trends 2025 report came out chronicling America’s global decline — that America’s mystique as a great nation had been punctured by the invasion of Iraq. We showed key limits in our military and economic capacity, leading allies and foes respectively to count on us and fear us less. The economic crisis is the punctuation point in America’s fall from its once significant global perch. I’m worried about all of this — making a traditional thanksgiving very uncomfortable.
Our new president preaches inclusion, which is a good thing — and I think he has the potential to be one of the great stewards of the White House and the executive branch authority we have given him.
But how could people who helped deliver this man to the White House also spit on my decision to enter into marriage with someone I have been with for 17 years? Europe has embraced adjustments in marriage easily and in a socially healthy way, and yet we still stoke embers of nativism and fundamentalism in this country. Barack Obama’s voice was used on anti-gay marriage robocalls to African-American and Hispanic voters in California. To my knowledge, he didn’t ask for his voice not to be used.
I think intolerance is what undermines the glue of a nation, stirring up fear and violence at home and in wars abroad. We have a lot of intolerant Americans who helped elect George W. Bush twice to the White House, and now we have many other intolerant Americans who have come into their civic responsibilities as voters and have tainted the hope that people like my partner and I have for a better and more just nation that recognizes our relationship in the ways it should be recognized.
I’m going to see the movie Milk today starring Sean Penn reprising brilliantly the life of the assassinated first gay elected politician in the United States — and no matter what Proposition 8 thought it achieved, I’ll be wearing my ring.
So, this is an uncomfortable Thanksgiving holiday, and I hope that those who read this today do embrace their family and friends — all of them, gay ones too — and remember that this nation needs to stop dragging when it comes to bigotry.
— Steve Clemons

Annie on the Lake
Can Turkey Really Help Solve the Iran Nuclear Problem?

99 comments on “Uncomfortable Thanksgiving: Obama, Prop 8, and My Marriage”