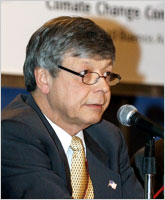 Apparently, John Bolton isn’t the only one who didn’t get the message that he’s irrelevant.
Harlan Watson, chief climate negotiator under the Bush Administration, is up to his old tricks. This time, he’s not just distorting science — he’s misrepresenting Barack Obama, dismissing prospects for progress, and ignoring the tone of his own boss, all in an official diplomatic capacity representing the United States of America.
According to a friend who’s in Poznan, Poland for this year’s conference on the Framework Convention on Climate Change and the Kyoto Protocol, Watson told the press that Obama’s position on getting out in front of developing countries on climate change is identical to Bush’s. He said that Obama has been “silent” on the international dimensions of climate climate change. He proclaimed that there would be no Congressional action “anytime soon.” Finally, Watson generally derided the prospects for international agreement, saying consensus on long-term targets and baseline years won’t be forthcoming.
All this despite insistence from his boss, Under Secretary of State Paula Dobriansky, that the current team plans to politely defer everything important to the next administration. Watson, who was first installed at ExxonMobil’s request, doesn’t seem to care.
Fortunately, Watson’s destructive comments are falling on deaf ears. So far, America’s partners are going right on ahead with negotiations, plodding towards an agreement for the next emissions reduction commitment period and discussing how to make the existing regime work.
This is a big week in Poznan — negotiators are cobbling together the framework for the “long term vision,” which may contain a global emissions goal for the principals to negotiate next week. I understand that Ban-Ki Moon is also scheduled to appear. But in the meanwhile, a loose cannon is firing. Hopefully the damage can be controlled.
Stay tuned — more to come.
— Scott Paul

9 comments on “I Spit My Last Breath at Thee”