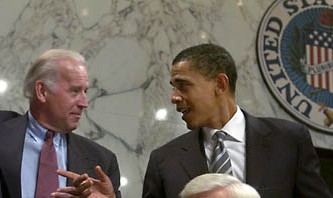 Obama’s campaign is really smart. They have the blogging and media communities jumping at every flick of the Obama campaign’s collective pinky — wondering what this gesture or that might reveal about who will be selected as Obama’s running mate.
I’m fascinated by the tension that has built up over this selection process and think that almost anyone but Evan Bayh is going to get thunderous applause — mostly because folks will be relieved that the wait is over.
Sources can be wobbly, and anyone trying to reach out to insiders runs the risk of being drawn into a trap or being fed false or just unintentionally incorrect information.
But my best guess today — as I’ve said for days now — is that Obama’s choice is Joe Biden.
In contrast to the netroots and progressive community’s “surge of concern” over the former momentum of Evan Bayh’s selection — a wide range of support exists for Joe Biden.
Biden polls well with working women, with white working class males, with Hispanics, and perhaps most importantly — with the elderly and with elder, politically active Jewish-Americans who give a disproportionate amount of money politically in comparison to the population size of Jewish-Americans in the U.S. And Biden, on the whole, is liked by the netroots and progressive communities — and the blogosphere in recent days has embraced him.
There could be a sleeper candidate, or Obama could change his mind.
But what I think I know is that Senator Obama has decided with a 98% factor of certainty on his choice. Obama is able to change course if need be between now and the VP announcement if something unexpected shows up in the political marketplace about his as yet unannounced but probable running mate.
Tom Daschle and Evan Bayh were called and told they will not be ‘it’ according to several sources. I don’t have anything on Tim Kaine — other than insiders tell me that Obama has decided against him — mostly because he doesn’t help check off the foreign policy box or experience box. I just don’t hear much about Kathleen Sebelius so am not counting her as a strong candidate.
Wesley Clark and Bill Richardson were not seriously considered according to sources — and Jack Reed, who Obama likes a great deal, would not allow himself to be vetted. I don’t believe Chris Dodd was high on the list.
Sam Nunn was knocked out by progressives, and this blog may have helped with regard to his unreformed position on “Don’t Ask, Don’t Tell.”
Hagel would be a game-changing choice on a few levels — but one of those levels could produce a strange scenario in which his selection could anger enough super delegates that they would revolt and hand Hillary Clinton a surprise convention victory. That means Hagel is not a real option.
Hillary Rodham Clinton would be a shocker — a move that would both force everyone to catch their breath and say ‘wow’ while at the same time animating Republicans who were asleep with their own candidate’s blandness to arise and work against an Obama-Clinton win. Essentially, I think Obama has decided against Hillary and what he fears would be a dysfunctional presidency with her — even though an Obama/Clinton ticket is one of the few combinations that looks like a knock out punch to McCain and the Republicans.
But that leaves Joe Biden, who was recently traveling in Georgia and surveying the situation there. In typical Biden style, the Senate Foreign Relations Committee Chairman specified where Russia had crossed inappropriate lines but he did so without squealing in some hyperventilating manner like so many other pundits and observers have. And he left portals open to explore what is right, and what is effective and in American interests regarding future such situations as Georgia and NATO. He didn’t jump behind Georgia full stop on everything. Biden was judicious — and we need more of that.
But has Biden heard a word from Obama or his team?
My sources say NO.
According to one source, there has been total radio silence.
Well, be thankful for radio silence I guess when other candidates for VP are getting phone calls saying “Sorry….but we look forward to working with you in many other ways in the coming years.”
The word that Obama has not communicated with Biden makes him, in the estimation of many, the likely candidate — as Obama knows that Biden will accept on a moment’s notice. I confirmed this with a person very close to the Delaware Senator.
The thinking is that the moment a VEEP candidate gets the positive nod from Obama, the candidate then tells his spouse and family — and they can’t help but tell close family and friends, and then bloggers like me get the drift and put it out there. To keep it quiet and the decision un-firm continues the buzz, hype and dominance of the media by Team Obama — and also keeps Obama’s options open until the last possible moment lest something unexpected pop up.
Intrade, which is a futures prediction market, confirms much of what I have written. The last trade has Biden surging 19 points to 50% probability of selection.
What is interesting is the roster of other rankings:

Did you catch that last bit? Wow. . .what a fall.
— Steve Clemons

Biden: Does He Know Something We Don’t Know?
Geopolitical Stickiness — What Our Policies Toward Georgia, Pakistan & Colombia Have in Common