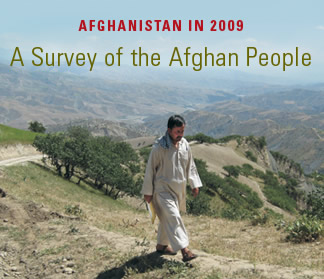 Tomorrow, the New America Foundation is giving back up support for a large conference in the US Senate organized by the RAND Corporation focused on American policy options toward Afghanistan. I think the event is sold out at this point — with more than 500 attendees — but the videos will be posted at a later time here at The Washington Note.
But what do Afghans think about their situation?
The Asia Foundation has just released the results of its 2009 Afghan Public Opinion Poll on the subjects of security, reconstruction, and governance.
The most surprising result that jumped out at me was that 42% of Afghans think the country is moving in the right direction (although 64% thought this in 2004) while 29% thought Afghanistan was going in the wrong direction.
The survey showed that insecurity — attacks, violence, and terrorism — were the country’s biggest challenges.
This is good resource material for those digging into the way Afghans view their circumstances now.
— Steve Clemons