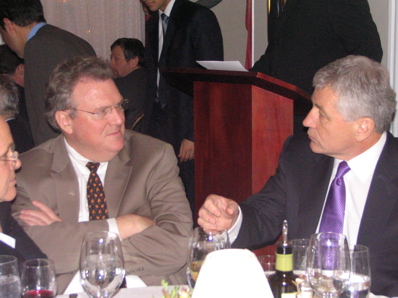 (Daniel Yergin, Richard Vague, and Senator Chuck Hagel at New America Foundation salon dinner, 20 February 2007)
Richard Vague, a businessman who became distressed by the course the U.S. was on and its misapplication of power and resources in the inaptly named war on terror, wrote a set of New America Foundation essays titled Terrorism: A Brief for Americans. (pdf version here)
This brief was designed for those casually interested in the affairs of Washington — businessmen, primarily — who have other things going on in their lives and don’t realize how the US economy and America’s own moral credibility were being quickly undermined by the war in Iraq and our collectively bad national security decisions.
Vague — who was at one time the founder of the largest credit card business in America — is a moderate Republican, basically a Chuck Hagel-type Republican who respects and supports the positions and work of Senators like Joe Biden and Richard Lugar. I think it’s important for the next presidential administration — either under Hillary Clinton or Barack Obama — to make a lot of space under their tent for Chuck Hagel Republicans, who in this environment and most likely in a McCain administration are considered “dissidents.”

I strongly agree with Vague’s manner of dismantling the inappropriate metaphor of a global war on terror and his efforts to reach “regular Americans” who have basically subcontracted out the national security and foreign policy challenges of the country to people who are undermining their interests.
I missed previously and just read this interview with Richard Vague in the Philadelphia Inquirer in February but particularly liked this section:

A: The most important policy we have toward Muslim countries is our terrorism policy, which has been misguided and has led to increased global terrorism, a $2 trillion war, and $100 per barrel oil.
While we clearly need to pursue true terrorists, the real solution to terrorism has to be economic and political rather than military. . . . If you kill a terrorist but don’t take care of these causal issues, another terrorist will simply rise to take his place. If you instead reverse the political and economic calamity, this terrorism will wither away.
Q: President Bush says Iraq is stabilizing, and U.S. troops need to stay or our enemies will take over. Is he right?
A: Instead of supporting our stated goal of unifying the country under a common government, [U.S.-led forces] are essentially ceding the most troubled regions to local warlords, such as Sunni warlords in Anbar province, where they had previously been fighting against those same warlords. This has had the effect of temporarily reducing violence. . . . This only delays the day of reckoning, however, and leaves unaddressed and unresolved the structural problems of the country.
Q: Are there examples where big nations like the United States have successfully adapted the strategies and tactics you recommend?
A: The U.S. has successfully used economic policy to combat dangerous instability and ideologies on a number of occasions, the most famous being the indispensable Marshall Plan in Europe deployed after World War II. Several South American countries have used economic policy as a tool in recent decades to help successfully fend off violent terrorists such as Peru’s Shining Path.
Q: Who are the United States’ actual and potential allies in Muslim countries?
A: While no country supports all the things we would want them to, not even Britain, and none of them has a government that has all the features we would like, countries such as Turkey, Morocco, Jordan, Malaysia and many others are allied with us on a very large number of matters.
Q: How have you formed and evolved your views on the U.S. role in the world?
A: I try to read as broadly as possible – from books about Darius in Persia in the 5th century B.C.E., to China and Africa in the Middle Ages, to Japan in the first half of the 20th century.
I look for the universal principles history reveals about human nature and the patterns of history that emerge.
When 9/11 occurred, though many viewed it as a singular moment in history and view the current terror threat as unique, they are in fact part of well-established patterns from the past.

For those interested in more commentary from Richard Vague, here is a talk he gave at my New America Foundation shop in July 2007.
It’s interesting to note that when he gave this talk, oil was $63 per barrel — and that worried him. Now it’s nearly double that — and we haven’t even had any of the next wars that John McCain has said he feels are inevitable.
I hope that a President Obama or President Clinton will be quick to get someone like Richard Vague quickly appointed to a key role helping to reshape and redirect American public diplomacy and foreign policy.
— Steve Clemons

The Limits of Hope: Getting Real about the American Economy
“Why Not Join Another Church?”

14 comments on “Vague’s Activism: A CEO’s Approach to Diplomacy and Foreign Policy”