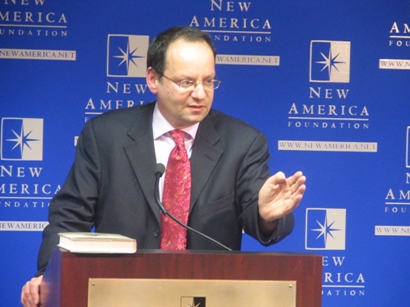 From the same person who broke the story on Prime Minister Tony Blair’s January of 2003 conversation with President Bush that sealed their agreement to invade Iraq regardless of the UN Security Council outcome (and even use a UN plane to bait an attack), Matrix Chambers Barrister and University College London Law Professor Philippe Sands has produced a stunning cover story in Vanity Fair magazine this month on the legal maneuvers that laid the foundations for a US policy of torture.
Some excerpts from the article — which itself is only a prelude to the book — needed to pulled for the revelations they offered. Most entertaining, though of lesser importance, is the unflattering portrait Sands paints of former Under Secretary of Defense Douglas Feith.
First on international law and global perception:

“This year I was really a player,” Feith said, thinking back on 2002 and relishing the memory. I asked him whether, in the end, he was at all concerned that the Geneva decision might have diminished America’s moral authority. He was not. “The problem with moral authority,” he said, was “people who should know better, like yourself, siding with the assholes, to put it crudely.”

Then on plausible deniability:

Dunlavey described Feith to me as one of his main points of contact. Feith, for his part, had told me that he knew nothing about any specific interrogation issues until the Haynes Memo suddenly landed on his desk. But that couldn’t be right — in the memo itself Haynes had written, “I have discussed this with the Deputy, Doug Feith and General Myers.” I read the sentence aloud. Feith looked at me. His only response was to tell me that I had mispronounced his name. “It’s Fythe,” he said. “Not Faith.”

But Feith aside, Sands really lands a damning punch when connecting the dots on the points of contact between the highest level administration officials/decision makers and the operators who carried out their illegal plans at Guantanamo.

Not everyone at Guantanamo was enthusiastic. The F.B.I. and the Naval Criminal Investigative Service refused to be associated with aggressive interrogation. They opposed the techniques. One of the N.C.I.S. psychologists, Mike Gelles, knew about the brainstorming sessions but stayed away. He was dismissive of the administration’s contention that the techniques trickled up on their own from Guantanamo. “That’s not accurate,” he said flatly. “This was not done by a bunch of people down in Gitmo — no way.”
That view is buttressed by a key event that has received virtually no attention. On September 25, as the process of elaborating new interrogation techniques reached a critical point, a delegation of the administration’s most senior lawyers arrived at Guantanamo. The group included the president’s lawyer, Alberto Gonzales, who had by then received the Yoo-Bybee Memo; Vice President Cheney’s lawyer, David Addington, who had contributed to the writing of that memo; the C.I.A.’s John Rizzo, who had asked for a Justice Department sign-off on individual techniques, including waterboarding, and received the second (and still secret) Yoo-Bybee Memo; and Jim Haynes, Rumsfeld’s counsel. They were all well aware of al-Qahtani. “They wanted to know what we were doing to get to this guy,” Dunlavey told me, “and Addington was interested in how we were managing it.” I asked what they had to say. “They brought ideas with them which had been given from sources in D.C.,” Dunlavey said. “They came down to observe and talk.” Throughout this whole period, Dunlavey went on, Rumsfeld was “directly and regularly involved.”
Beaver confirmed the account of the visit. Addington talked a great deal, and it was obvious to her that he was a “very powerful man” and “definitely the guy in charge,” with a booming voice and confident style. Gonzales was quiet. Haynes, a friend and protege of Addington’s, seemed especially interested in the military commissions, which were to decide the fate of individual detainees. They met with the intelligence people and talked about new interrogation methods. They also witnessed some interrogations. Beaver spent time with the group. Talking about the episode even long afterward made her visibly anxious. Her hand tapped and she moved restlessly in her chair. She recalled the message they had received from the visitors: Do “whatever needed to be done.” That was a green light from the very top — the lawyers for Bush, Cheney, Rumsfeld, and the C.I.A. The administration’s version of events — that it became involved in the Guantanamo interrogations only in November, after receiving a list of techniques out of the blue from the “aggressive major general” — was demonstrably false.

Sands will be speaking tomorrow (Tuesday May 5) at 3:30pm the New America Foundation offices in a talk sure to be littered with more zingers and telling anecdotes. Accompanying him will be by Col. (Ret.) Lawrence Wilkerson, another leading expert on the dilemmas of national security law who has been known to be quite a force when standing behind a podium.
— Sameer Lalwani

8 comments on “Authorizing Torture One Memo at a Time”