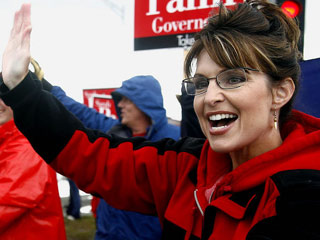 Bill Kristol says that he was off on a conservatives-only cruise to Alaska to see glaciers and icebergs when he discovered the high sizzle Murkowski-slayer Sarah Palin.
Well, from this Newsweek piece, it seems that we have perhaps only seen the “tip” of the iceberg on Palin gossip:

NEWSWEEK has also learned that Palin’s shopping spree at high-end department stores was more extensive than previously reported. While publicly supporting Palin, McCain’s top advisers privately fumed at what they regarded as her outrageous profligacy. One senior aide said that Nicolle Wallace had told Palin to buy three suits for the convention and hire a stylist. But instead, the vice presidential nominee began buying for herself and her family–clothes and accessories from top stores such as Saks Fifth Avenue and Neiman Marcus.
According to two knowledgeable sources, a vast majority of the clothes were bought by a wealthy donor, who was shocked when he got the bill. Palin also used low-level staffers to buy some of the clothes on their credit cards. The McCain campaign found out last week when the aides sought reimbursement. One aide estimated that she spent “tens of thousands” more than the reported $150,000, and that $20,000 to $40,000 went to buy clothes for her husband. Some articles of clothing have apparently been lost. An angry aide characterized the shopping spree as “Wasilla hillbillies looting Neiman Marcus from coast to coast,” and said the truth will eventually come out when the Republican Party audits its books.

21 comments on “Tip of the Iceberg: There May be Much More on Sarah Palin We Have Yet to Hear”