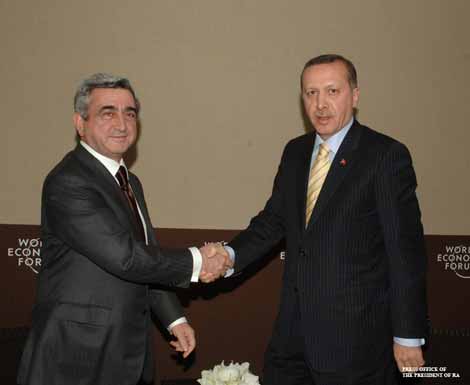 Armenian President Serzh Sargsian and Turkish Prime Minister Recep Tayyip Erdogan at Davos.
The Los Angeles Times reported yesterday that the administration is reconsidering President Obama’s campaign promise to declare that the Armenians were victims of a genocide during the collapse of the Ottoman Empire nearly one hundred years ago.
Also yesterday, the House of Representatives introduced H. Res 252, which declares the killings genocide.
To understand these recent announcements, it is important to understand the underlying politics.
To paraphrase Brent Scowcroft, the issue of whether to declare the killings genocide is not a foreign policy issue, but a domestic political issue. Similar to our policies toward Israel and Cuba, a well-mobilized and well-funded minority – in this case led by the Armenian National Committee of America and the Armenian Assembly of America – wields disproportionate influence.
President Obama’s decision to “postpone” his genocide declaration should not come as a surprise. Former Presidents George W. Bush and Clinton each also refrained from using the word as president after pledging to do so as candidates.
The reason for this is simple.
A genocide declaration would be deeply harmful to our relationship with Turkey, a relationship that has already suffered in recent years – due primarily to disagreements about the Iraq war, but also because of Turkey’s increasingly independent foreign policy and prominent regional role under the moderately Islamist Justice and Development Party (AKP) that assumed power in 2002.
Washington needs Turkish cooperation on a wide range of issues – Iraq, Afghanistan, energy security, and Iran to name a few – and is in no position to alienate the Turks.
Those who doubt the likely severity of the Turkish response should note the uproar that the “I apologize” campaign – an initiative by Turkish intellectuals and journalists to apologize for the “Great Massacre” of Armenians – has caused.
Furthermore, this year there is another, perhaps even more compelling reason to leave history to the historians.
Turkey and Armenia are closer to normalizing relations than at any point since Turkey closed the border in 1993. But a genocide declaration by Washington would likely undo more than a year of diplomatic progress.
As part of the ongoing dialogue between Ankara and Yerevan, Turkish officials have offered to compose a joint commission of historians to determine whether a genocide occurred or not – and Armenian president Serzh Sargsian has left the door open to this possibility.
If Turkey and Armenia can let the historians decide, then so too should the United States.
As Sameer Lalwani has written on this blog, we have skeletons in our own past – including what might be considered the genocide of Native Americans and more than 75 years of racial slavery.
Supporters of the resolution tend to make arguments like Scott Paul’s (from October 2007) – “that setting an example by doing the right thing might build some goodwill and encourage others to behave similarly, which would advance our interests in the long run.”
While I agree that setting examples that lead to genuine norm creation and that raise the global moral bar are important, it would make more sense for us to confront our own historical memory than to meddle in the historical memories of others.
We also need to abide by the Geneva Conventions, outlaw torture, and honor civil liberties. Those are the kinds of examples that we need to set.
— Ben Katcher

The View from Your Window
STREAMING LIVE: Charles Kupchan and Adam Mount on “The Autonomy Rule”

142 comments on “Let Turkey and Armenia Work Out Their Differences”