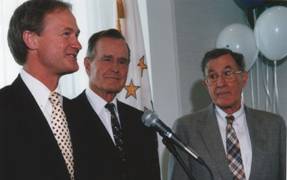 Tomorrow, Tuesday, at 12:15 pm, I will be chairing a meeting at the New America Foundation with former Senator Lincoln Chafee (R-RI).

Chafee, who is now a Distinguished Visiting Fellow at the Watson Center for International Studies at Brown University, is now a political independent and author of the book, Against the Tide: How a Compliant Congress Empowered a Reckless President.
Chafee helped launch Republicans for Obama along with philanthropist and former Bush 2000 campaign New York co-chair Rita Hauser and former Congressman Jim Leach. Chafee was also an indispensable partner, from a distance, in the battle to prevent John Bolton from receiving the confirmation of the US Senate as US Ambassador to the United Nations.
Bolton is still weighing in on international affairs and confirming every day why his brand of pugnacious nationalism is detrimental to American interests at the U.N.
The meeting will STREAM LIVE here at The Washington Note at 12:15 pm EST — and I will be sure to ask him about his reflections on patriotism in this time of swirling and severe political passions.
I will also ask him how given his background as a horse farrier, he became such an excellent, realist-tilting foreign policy expert. Lessons learned might be valuable given some of our political choices ahead.
— Steve Clemons

Where are the Obama Women? What about Hillary as Majority Leader?
On North Korea, Fasten Your Seat Belts

10 comments on “STREAMING LIVE: Lincoln Chafee on What Patriotism Looks Like”