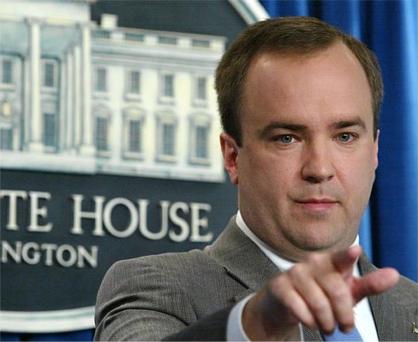 This is my next read. It’s overdue — and I’m sad to see that McClellan basically waited all of this time to tell his story. He should have gotten word to Patrick Fitzgerald that Libby and Rove were coordinating their Valerie Plame stories.
But the worst is even more confirmation that George W. Bush wasn’t just hoodwinked by neoconservative zealots on Iraq. I have known that for a long time — but to hear it yet again, Bush’s role in pumping out the propaganda to sell the war — is heart-ripping when one considers all who have died on all sides of this conflict and those too who have been physically and psychologically maimed.
McClellan confirms what Council on Foreign Relations President and former senior Bush administration official Richard Haass and many other national security experts have said about Iraq being a “war of choice”:

“History appears poised to confirm what most Americans today have decided: that the decision to invade Iraq was a serious strategic blunder. No one, including me, can know with absolute certainty how the war will be viewed decades from now when we can more fully understand its impact. What I do know is that war should only be waged when necessary, and the Iraq war was not necessary.”

And John McCain wants to keep it going. . .
— Steve Clemons