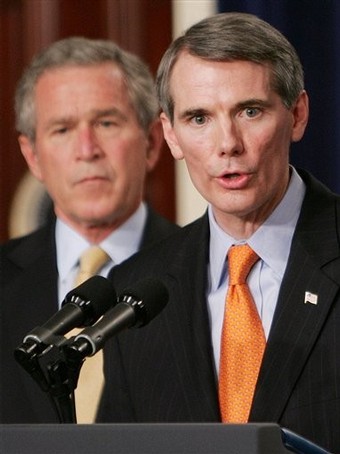 Politico reports that Rob Portman intends to run for Ohio Senator George Voinovich’s Senate seat when he retires in 2010, and the early word out of Ohio suggests that it may be difficult for Democrats to find a formidable challenger.
Portman certainly knows his way around Washington – he represented Ohio’s 2nd District for twelve years before serving as the United States Trade Representative during the unsuccessful Doha Trade Round. His most recent stint was as president of the Office of Management and Budget (OMB).
Portman’s tenure at USTR provided him with experience dealing with big picture global issues, and his reputation is one of a capable and pragmatic public servant, but he hasn’t offered enough public commentary to know whether he would embrace bold, game-changing policies in the national security and global economic policy arenas.
Thus far, he offers only this boilerplate, vague explanation of the 2008 election.
–Ben Katcher

5 comments on “Portman From Congress-USTR-OMB-…Senate?”