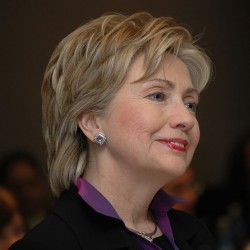 Unexpectedly I got a free day in Paris because United airlines took out of its fleet a plane deemed too risky.  I felt more lucky than frustrated when they decided to tow the plane away from the gate.

As a result I got to spend an evening and morning with nearly 300 other stranded passengers, mostly Americans, who shared openly their thoughts about Hillary Clinton’s predictable announcement that she wanted to be in charge of more than the decorations and Easter Egg rolling at the White House.

There is nothing scientific about the group I hung out with — some were older, some younger, some fit, some not, ethnically diverse, all in Paris for some reason or another, all among those I spoke to in economy class and remarkably patient in the many long lines that ensue after a flight is cancelled in order to get free lunch and hotel vouchers.

“She is an amazing woman and a great leader. I have such confidence in her,” said an elderly school teacher from the Norfolk, Virginia area. Her husband, in contrast, said that she paled in comparison to her husband, President Bill Clinton — but that Jeb Bush, when people stopped to think about it was “obviously far better than his President-brother.”

Others I spoke to either saw her in heroic, ceiling-shattering terms or saw her as a more cold-blooded calculator fashioning her political views according to what her campaign machinery and mandarins dictated. Some saw her as a panderer to identity politics in America.  One person said she’d be a “tool of Netanyahu.”  A number saw her as unexciting and wished that the Democrats had the guts to put forward a tough challenger to her.

But going back to that first husband-wife standoff over Hillary, It struck me that if indeed America delivers a battle between its contemporary political aristocracies, the Bushes and the Clintons, that the challenge for Hillary will be to overcome comparisons not with her Republican rival but with her peripatetic global do-gooding husband.  Bill Clinton’s strategic depth is palpable and he, during and after his presidency, came to personify the better dimensions of ‘globalization.’

Hillary’s file runs thinner.  For example, in Jonathan Allen’s blunt, Maureen Dowd-directed roster of what we know of Hillary, he starts with “Hillary is a Hawk,” another way of saying that she is stuck deep in a groove and not strategically nimble. That is an immediate contrast that will matter to many who ponder HRC filling in the title of Commander-in-Chief and only able to hold the throttle in the charge, bomb, and invade position.

Jeb Bush too may find himself figuring out ways to differentiate his brand of Bush-ness from 12 years of his kin holding the keys to the White House. Jeb seems like he’d be less fun to have a beer with at a barbecue and more fun playing chess against — and that, in my book, is a good thing.