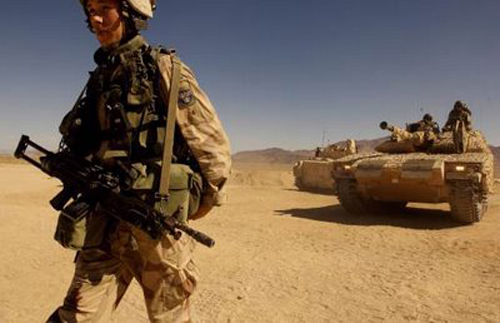 Cato Institute foreign policy program Christopher Preble has a smart piece on the Partnership for a Secure America blog “Across the Aisle” today correctly noting that there is no bipartisan divide on US strategy in Afghanistan. Instead, there is a divide between “two bipartisan consensuses.”
Preble writes:

In keeping with the PSA’s charter, we’re seeing bipartisan consensus emerging around U.S. policy in Afghanistan. The bad news? There are actually two bipartisan consensuses.
Technically, that is impossible. Consensus means “general agreement” or “a view reached by a group as a whole” so there can’t really be more than one.
And that is the problem. So long as the right is fighting the right, and others on the left are fighting the left, policymakers will be inclined to focus on other policy issues, content to let Afghan policy drift, and hope for a miraculous turnaround (e.g. Karzai becomes less corrupt and more competent; the Afghan economy begins to produce something other than opium; the Pashtuns decide to make common cause with the Tajiks, Turkmen and Hazara; Afghan men decide that Afghan women should have rights, etc).
Our men and women in uniform, engaged increasingly in armed social work are caught in the middle while the pointy-heads pull on their respective chins.
Certain leading voices on the right agree with others on the left that we must redefine our ends in Afghanistan, and begin exploring ways to draw down the military presence there.

I’m with those that think that “Surge Envy” is not a strategy – and that the inflation of America’s commitment to a different order in Afghanistan is outrunning reasonable deployment of resources and any ability to sustain a stable national outcome that Americans will be able to support.
Preble is author of The Power Problem: How American Military Dominance Makes Us Less Safe, Less Prosperous and Less Free.
Preble and I were also founding board members of the Coalition for a Realistic Foreign Policy — which we established during the Iraq War and which we are considering resuscitating to address our concerns about the war in Afghanistan.
— Steve Clemons

The Japan Election and Consequences: Bob Schieffer, Kurt Campbell, Michael Green & Steve Clemons
Zinni calls on Obama to Release “National Strategy Report” and for US “Smart Power” Functions to be Organized in a New Military Command