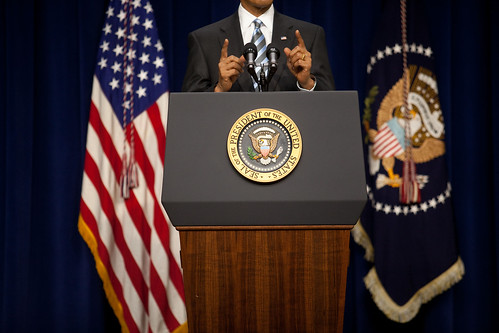 Patrick Doherty directs the New America Foundation/U.S.-Cuba 21st Century Policy Initiative.
Yesterday, three significant statements were made regarding the United States’ policy towards Cuba. President Barack Obama, responding to dissident Cuban blogger Yoani Sanchez, signaled to Congress and Havana his willingness to break the stalemate on Cuba policy. House Foreign Affairs Committee Chairman Howard Berman (D-Calif.) came out forcefully in favor of ending the 50 year old travel ban keeping Americans from traveling to Cuba. And Speaker of the House Nancy Pelosi protected President Obama’s health care flank by saying Cuba will not interfere with the President’s legislative agenda.
It was a great day.
President Obama’s words were perhaps the most important development and are a substantial development in an evolving policy. In May 2008, speaking before the Cuban American National Foundation, President Obama articulated a three point policy on Cuba: he will allow Cuban Americans to travel more freely to Cuba; he will allow Cuban Americans to send unlimited remittances to the island, and he will not end the embargo. In April 2009, President Obama fulfilled his campaign promise and then offered to initiate talks while presidential spokesman Robert Gibbs suggested that before normalization, Cuba will have to release its political prisoners. In August, senior career State Department officials initiated talks with Cuba over migration and mail service. Yesterday, the president broke new ground, and stepped more clearly from the policy of conditionality:

We have already initiated a dialogue on areas of mutual concern – safe, legal and orderly migration, and reestablishing direct mail service. These are small steps, but an important part of a process to move U.S.-Cuban relations in a new and more positive, direction. Achieving a more normal relationship, however, will require action by the Cuban government.

“Will require action by the Cuban government,” is the key phrase. For those who want to see an end to a dysfunctional and counter-productive embargo it is the first time in decades that preconditions were not explicitly stated as a requirement for normalization. Of course a more normal relationship will require action by the Cuban government: they will have to allow our diplomats freedom to travel, they will have to work hard to address American concerns around counter-terrorism, counter-narcotics, human smuggling, they will have to improve their airline and banking security and transparency. They will have to finally put to bed any outstanding property claims. From where I sit, these are all issues the Cuban government is prepared to negotiate and make changes around. In other words, the President just cleared the diplomatic path to more in-depth negotiations.
Not only is this statement a signal to Havana that Obama is serious about moving forward with talks, packaged brilliantly in a tweak of the Castro government by responding to Yoani Sanchez–it is also a signal to Congress. Sanchez submitted these questions to the president months ago. The White House chose to release them the day of Chairman Berman’s landmark hearing on Cuba travel. For those members of the House and Senate looking for a signal that this administration supports the legislation to end the ban on travel, this is as good as it will get before the Senate passes health care reform.
Which brings us to Mr. Berman’s well-timed hearing. Summing up his position, the powerful foreign affairs committee chairman said, “Let’s face it. By any objective measure, the nearly 50-year-old travel ban simply hasn’t worked.” It was a pivotal statement at an important hearing. To hold this hearing, Chairman Berman had to break dramatically from the Ranking Member, Ileana Ros-Lehtinen (R-Fla.) and get out ahead of many of his democratic colleagues on the committee. It was a bold move and will set in motion an avalanche of politicking on the Committee in advance of the mark-up of the Delahunt-Flake bill that would make the Chairman’s position the law of the land. But make no mistake. The fact that the Chairman and the President made these statements on the same day denotes exactly where these two leaders are. That Berman and Ranking Member of the Senate Foreign Relations Committee, Richard Lugar co-authored an op-ed earlier in the week is also an indicator of where Senator Kerry, SFRC Chairman will soon come out. This policy is wired for change.
The only question that remains is timing. On that score, Speaker Nancy Pelosi was given the job of managing expectations, lest these important signals confuse presidential intent for urgency. President Obama’s larger agenda depends on his passing robust health care reform and he will not willingly spend any more political capital on any other issue until the Senate puts a bill on his desk. Speaker Pelosi, by saying that she too supports ending the travel ban but that it must take its place behind health care and jobs, is preserving the president’s capital stock.
But make no mistake. The political leadership of the United States of America just sent Congress and Havana some very clear signals about their intentions on Cuba policy.
— Patrick Doherty

Obey Tells Obama: Afghanistan War Tax or No Surge
JFK Remembered: What Kennedy Would Approve of and Be Disappointed By in the Time of Obama