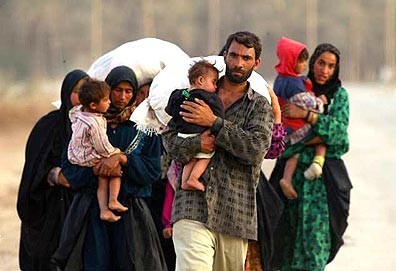 I’m still in Saudi Arabia and haven’t had the time to absorb everything that has been churning this last week with the Petraeus/Crocker hearings and other Senator Foreign Relations Committee meetings focused on Iraq that Senators Joe Biden and Richard Lugar have called.
I have seen two pieces though that rip a hole into the official “take” on America’s position in Iraq. These are from National Interest senior editor Jacob Heilbrunn and my colleague and friend Nir Rosen who gave testimony in the Senate Foreign Relations Committee.
First Jacob Heilbrunn, a clip from “Tell Me How This Ends“:

What Petraeus could not acknowledge, however, is that there is no such thing as an Iraqi government. Instead, there is a cabal that would like to consolidate power. But in essence, the United States has created a fictional regime complete with a military force that is unwilling to fight, apart from when it defects to the enemy (one thousand in Basra alone). Even the contention that the surge provided a breathing space for more political reconciliation turns out to be a sham. Ultimately, Petraeus, shorn of the claim that the surge is working by the current fusillade of missiles raining on the Green Zone, which has itself become a symbol of American impotence rather than might, could only retreat to various doomsday scenarios of an Iraq engulfed by civil war or becoming a client state of Iran’s.
The civil-war scenario is losing its hold. Part of the problem is that Iraq is already experiencing fratricidal warfare. Another part is that America itself is no foreign-policy innocent in Iraq. Though a number of conservatives have repeatedly tried to invoke the specter of the chaos that ensued in Vietnam upon America’s departure–helicopters taking off from the embassy, national humiliation, the boat people washing up on American shores–Iraq is somewhat different. For one thing, the refugee crisis already exists. It was created by the American invasion. Iraq, then, isn’t simply a military calamity. It is also a moral one.
According to Deborah Campbell in the April issue of Harper’s, who has spent several months living in Syria among Iraqi refugees, America has created “the largest exodus in the Middle East since the Palestinian refugee crisis of 1948.” One-fifth of Iraqis have fled their homes–2.5 million are displaced within Iraq, while another 2.5 million have gone into exile. America resettled some 1.4 million refugees after Vietnam, but less than 4,000 Iraqis have been accepted between 2003 to 2008. There’s another point that may bear upon Iraq.
Americans would have supported exiting Vietnam even if they had been aware of the terrible destruction that lay ahead. It wasn’t a choice between boat people or staying the course. The American public had already decided it didn’t want to stay the course. Something similar may well happen in Iraq, which is why the Bush administration would be wiser to try and work out a deal on Iraq before the desire to exit Iraq shifts from a longing to a stampede.

Most embedded journalists, just like embedded politicians and embedded members of think tanks on Washington’s K Street or Massachusetts Avenue, lack language skills and time on the ground in Iraq–and since they are white, they cannot travel around Baghdad without attracting attention and getting kidnapped or killed.
They know nothing about Iraq except what they gain through second- or third-hand knowledge, too often provided by equally disconnected members of the US military. Recently we have seen positive articles about events in Iraq published by so called experts such as Anthony Cordesman, Michael O’Hanlon, Kenneth Pollack, Fred Kagan and even former members of the Coalition Provisional Council such as Dan Senor. These men speak no Arabic and cannot get around without their babysitters from the American military. But it seems that the more they get wrong, these and other propagandists for the war, such as Thomas Friedman, manage to maintain their credibility.
They should ask Iraqis, or those journalists who courageously risk their lives to spend enough time with Iraqis to serve as their interlocutors–such as Leila Fadel of McClatchy, Ghaith Abdel Ahad of the Guardian or Patrick Cockburn of the London Independent — what is actually happening in Iraq, rather than continue to deceive the American people with the fantasy of “victory.”
It is true that fewer American soldiers are dying today, but that is not the proper metric for success. Of course less Americans are dying. In 2006 the conflict in Iraq stopped being a war of national liberation against the American occupation and became chiefly a war between Iraqis for control of Iraq. They proper standard for judging Iraq is the quality of life for Iraqis, and sadly, for most Iraqis, life was better under Saddam.

There is no reality in Iraq we all collectively and empirically see. We are negotiating the terms of that reality over and over again.
— Steve Clemons