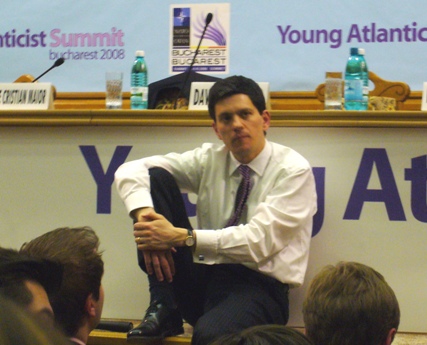 UK Foreign Secretary David Miliband has begun to cultivate a reputation as a young, thoughtful, and charismatic diplomat amidst more seasoned but less dynamic peers. When he spoke to the Young Atlanticists two weeks ago in Bucharest, he seemed to enjoy playing to this persona. In contrast to every major leader and head of state who addressed the Young Atlanticist Summit, Miliband stood out by doffing his jacket the moment he sat down, rolling his eyes at the reading of his official biography, opting to sit in the platform in front of the speakers dias to make it a more intimate conversation with the young atlanticists, and initially leading off with a mention of his blog of assorted commentary on policymaking, foreign affairs, and football. (He also promised a post on our discussion, on which he delivered).
His brief opening remarks also broke from traditional transatlantic talking points by outlining four major discontinuities that warranted a reconfiguration of NATO in terms of geographic boundaries, non-military functions, and partnerships — particularly but not limited to the UN and the EU.
But noticeably absent from Miliband’s insightful remarks was the word “China” or more specifically any mention of how the evolving geopolitical challenges for NATO and the transatlantic partnership would contend with or accommodate for China’s growth, not as an individual state but something between an imperial power (as Parag Khanna has argued) and an anchor for a new international order (as Steven Weber has argued).
The central basis for the transatlantic partnership Miliband expressed was that of “shared values” but how can the partnership and NATO adapt to these new geopolitical realities where the central challenge is that of states and systems do not share those values. I asked this of Miliband who’s response (see the clip below) I found intriguing, but more aspirational rather than realistic about what we could extract from China.

He essentially suggested we take China’s value on non-intervention and national sovereignty and turn it into a concept of responsible sovereignty –both downwards towards one’s on own citizens and upwards towards the international system. Though a clever rhetorical move, the notion that China would accept Western concepts of “responsibility” after years of reckless, irresponsible foreign policy agenda was improbable.
Perhaps my question did not set properly set up the argument I was angling towards but I was still surprised that Miliband, despite all the appearance and substance as a next generation big-think policymaker, did not put this front and center as an issue for Europe and NATO.
Yesterday at a public forum, Steven Weber, along with Flynt Leverett and Fred Kempe discussed the “World Without West” thesis described in these lines:

The landscape of globalization now looks like this: While connectivity for the globe as a whole has increased in the last twenty years, it is increasing at a much faster rate among countries outside the Western bloc. The World Without the West is becoming preferentially and densely interconnected. This creates the foundation for the development of a new, parallel international system, with its own distinctive set of rules, institutions, ways of doing things — and currencies of power.
The World Without the West, like any political order, is made up of two ingredients: A set of ideas about governance and a set of power resources that enable, embed and occasionally enforce those ideas. This alternative order rests on wealth drawn from natural resources and industrial production (along with the management expertise applied to those capabilities). And it proposes to manage international politics through a neo-Westphalian synthesis comprised of hard-shell states that bargain with each other about the terms of their external relationships, but staunchly respect the rights of each to order its own society, politics and culture without external interference. Neither of these elements by itself would make for a concrete alternative to the Western system, but together they synergistically stabilize into a robust political-economic order.

The implications are grave. Weber suggested at minimum, the degree of interaction amongst the non-west orbit affords increased bargaining power on geoeconomic and geopolitical fronts when dealing with the US and the West, but at maximum, it means the creation of a new center of gravity. In light of this soft-balancing, the non-military ways to constrain us, Leverett argued that we could no longer afford the illusion of ourselves as the indispensible nation, one that does not have to make clear strategic priorities and choices, or accord other rising states more of a decision making role in the international order.
Relative to the other speakers, Kempe was more bullish about what the transatlantic partnership could do to regain some lost ground in these “non-west” or “southern democracy” theaters but all three were bearish on the political leadership, particularly in the United States, coming to terms with these new realities, let alone formulating strategies to address and accommodate for them.
Miliband strikes me as the kind of thoughtful but shrewd leader (and many suggest future British PM) who has the potential to come to terms with these new systems of interaction and alignment and devise a more strategic approach. Though having grown increasingly skeptical of the conventional discussions of democracy-promotion, in a speech in January Miliband offered one of the first sober and an impressive defenses and re-castings of a real democracy promotion agenda — one that takes the long-term development of political and economic institutions very seriously — that I’ve seen in number of years.
Though he may not be there yet, it is evident his conceptualizations of responsible sovereignty and developmental democracy are probably amongst the better tools for formulating a strategy for the future of “the west”.
— Sameer Lalwani

Open Thread: And Then There Were Three. . .
More on China Blind Spots

3 comments on “Miliband, China, and the World Without the West”