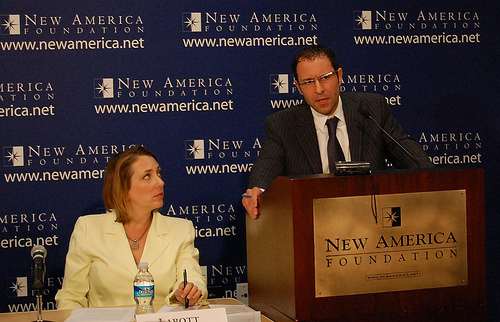 Today at 11:45 am EST, we will stream an event titled “The Middle East Comes to Town — Expectations for Obama’s Visits with Netanyahu, Abbas, and Mubarak” taking place at the New America Foundation. It will end at approximately 1:30 pm.
The event is billed with this hopeful bit:

On the eve of the trips to Washington by Israeli Prime Minister Benjamin Netanyahu, Palestinian President Mahmoud Abbas, and Egyptian President Hosni Mubarak, the Obama administration will begin to articulate and get into the weeds on a new Middle East peace policy.

We’ll see.
New America Foundation/Middle East Task Force Directors Daniel Levy and Amjad Atallah will be joined by Shibley Telhami, Anwar Sadat Professor for Peace and Development at the University of Maryland, and Rob Malley, Director of the Middle East and North Africa Program at the International Crisis Group.
Elise Labott, State Department Producer for CNN, will moderate the session.
I will be watching it from Berlin — perhaps live — but at least later when the video is posted online.
— Steve Clemons

2 comments on “LIVE STREAM: The Middle East Comes to Washington”