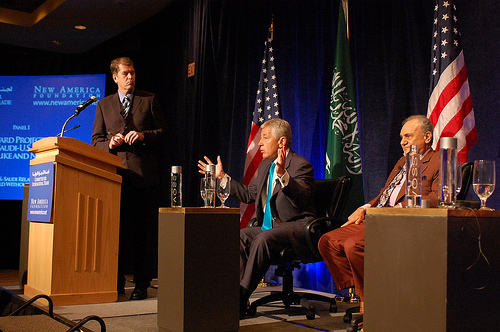 Note: Under Secretary of State for Political Affairs William J. Burns will deliver remarks at approximately 12:45 pm. His remarks will be on the record. I will then moderate an off the record Q&A session with Secretary Burns, during which time this LIVE STREAM will cut out. We will then return at approximately 2:00 pm for our third panel discussion.
Today, I am co-charing a major national policy forum on US-Saudi economic and strategic perspectives on the Middle East and global economic and security system.
We have quite a line-up which I’ll share below. C-Span will be airing parts of the conference, but the entire program will run live here on The Washington Note — and video will be posted here for later viewing.
The event is full beyond capacity — so watching the streaming on the internet may be most comfortable for folks.
The entire program is here:

8:00 am
Registration & Coffee
8:45 am
Welcoming Remarks
9:00 am
A Forward Projection of What the Saudi-US Relationship Should Look Like and Needs to Achieve

And Then There Were 60. . .Arlen Specter Joins Democrats
Commission on Accountability Should Be Part of Our Response to America’s Torture Nightmare

9 comments on “LIVE STREAM TODAY: US-Saudi Relations in a World Without Equilibrium”