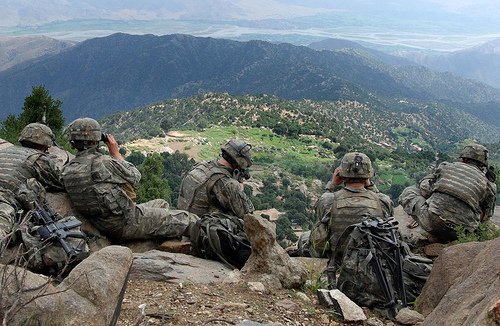 (Photo Credit: Army.mil’s Photostream)
I am sitting in an overflow room at the Center for a New American Security‘s third annual conference, “Striking A Balance: A New American Security.”
Two quick thoughts on the Afghanistan/Pakistan panel:
1. While most of the discussion concerned tactical and operational issues, Boston University Professor of International Relations and History Andrew Bacevich focused on the strategic level and delivered what were by far the most provocative comments.
Bacevich identifies two key assumptions underlying our continued occupation of Afghanistan – and contends that both are false. The first is that the United States has vital national interests in Afghanistan, and the second is that a semi-permanent occupation and pacification of the country can further those interests.
More broadly, Bacevich criticizes the idea that the United States can use military power to determine the fate of the broader Middle East – a notion that he says has dominated American foreign policy discourse since at least 1980 and that was placed at the forefront of our policy in the aftermath of 9/11.
He calls for a “radically different approach” to U.S. national security that emphasizes homeland defense over long-term, expensive foreign occupations.
I wonder what he would say about James Pinkerton‘s post advocating a robust national missile defense system.
2. I am surprised that the panel has not addressed the roles of China, Iran, and Russia – and how the United States can elicit the support of these regional stakeholders. It is difficult to imagine how we can construct an exit strategy that creates a stable situation in the region without all of the major players on board.
Steve Clemons has written about the need for a new Bonn Conference – like the one organized by former US Ambassador to the United Nations Zalmay Khalilzad and former Presidential Envoy James Dobbins in 2001.
For those interested, my colleague Katherine Tiedemann is twittering the conference.
— Ben Katcher