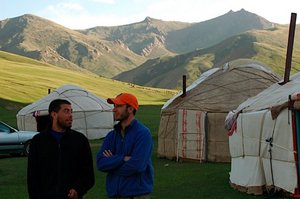 (Josh Tulkin with Scott Paul outside a yurt near Tash Rabat, Kyrgyzstan. Photo Credit: Zoe Chafe)
Josh Tulkin is a very close friend. He has dedicated his life to speaking for future generations and vulnerable populations threatened by climate change. He works tirelessly to make U.S. policies more responsive to folks who can’t stand up for themselves and reflective of our most treasured national values. As far as I’m concerned, any definition of “patriot” that excludes Josh — and other devoted “community organizers” — necessarily loses any real meaning (and I’m sure when he reads this statement he’ll be as touched by its sincerity as he will be amused by its grandiosity).
Last night, Josh told me that the state of Maryland thought he was a terrorist. I was tired. He was out in a loud public place. I woke up thinking I must have gotten some part of the conversation wrong. Not so: today, I found a copy of a letter from the Maryland State Police (MSP) to Josh confirming that he, along with a number of other Maryland activists, was improperly surveilled and under suspicion of domestic terrorism by MSP under Gov. Ehrlich from March 2005 to May 2006.
Here’s Josh:

It goes without saying that Josh and the other “suspects,” many of whom worked on anti-death penalty and peace initiatives, should be allowed to view their files with their attorneys present. Fortunately, the Maryland ACLU has taken up that battle.
This issue is bigger than Josh or the other wrongly surveilled individuals in Maryland. It’s part of an ongoing assault on civil rights, hand in hand with unchecked expansion of executive power. Sound familiar?
Andy Revkin at NYT has lots of good links on this. I’ll update if I get anything interesting from Josh.
— Scott Paul

Obama’s Cabinet Could be Announced Friday, November 7th
What’s Different and What’s the Same in Foreign Policy between McCain and Obama