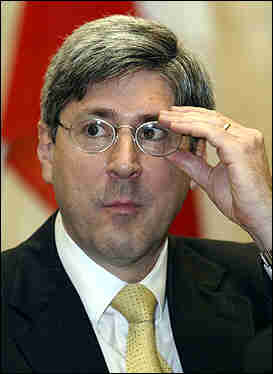 Hoffmania posts what I consider to be one of the most important, powerful exchanges I have seen on The Daily Show. While posing some of the discussion points for laughs, Stewart conducts an intense, tough interview.
The segments are nearly 20 minutes in length. In the first segment in posted on the link, Stewart says that the Administration’s level of deception slid over from “manslaughter to homicide.”
In the second segment, Stewart tells Feith, “You removed the ability of the American people to make an informed decision” about Iraq.
Don’t buy Doug Feith’s book, but watch these Jon Stewart clips.
— Steve Clemons

13 comments on “Jon Stewart Pins the Tail on Doug Feith”