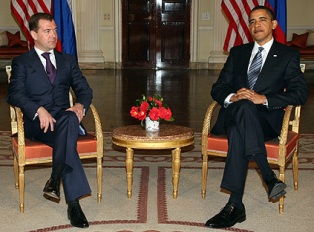 Among the Obama administration’s many promised changes to the United States’ strategic posture is an intention to “press the reset button” on U.S.-Russian relations.
Many Russia analysts have argued that while a strategic partnership may be impossible, Washington and Moscow have enough mutual interests to develop, in Nikolas Gvosdev’s words, “a relationship characterized by a major pragmatic approach to resolving issues and preventing disagreements from flaring up into full-scale crises.”
Similarly, Dmitri Simes, Thomas Graham and the Committee on U.S. Policy Toward Russia separately argue (here, here, and here) that Moscow and Washington share a number of interests – the most important of which include non-proliferation, counter-terrorism, and preventing a nuclear Iran.
The key, according to this view, is to elevate these issues to the top of the bilateral agenda and engage in sustained, high-level negotiations.
The corollary to this position is that the deterioration of relations can be blamed in part on the Bush administration’s failure to accommodate Russian interests on issues that are of vital national interest to Moscow, but of less import to Washington. American interests would be better served if Washington stopped lecturing Moscow about democracy, encouraging Ukraine and Georgia to join NATO, and attempting to install missile defense sites in Eastern Europe.
The Obama administration seems to agree that this kind of horse trading and agenda-setting can lead to productive compromise and cooperation. The first evidence of this was President Obama’s secret letter to Moscow in February, which hinted that he would be willing to suspend missile defense deployments in Eastern Europe in exchange for cooperation on the Iranian nuclear issue.
But the jury is still out on whether a more pragmatic, interest-based relationship is possible.
Obama’s overture has been unsuccessful thus far, as evidenced most recently by Russian Foreign Minister Sergey Lavrov’s response to a question on this subject at a recent forum at the Carnegie Endowment for International Peace in Washington.
Lavrov questioned the connection between the missile defense installations and the Iranian nuclear threat and said that “[Missile defense bases in Poland and Czech Republic]…would have nothing to do with Iranian potential threat [sic] but would have [a] very immediate effect on the Russian strategic arsenals in the European part of the Russian Federation.”
Council on Foreign Relations scholar Stephen Sestanovich, writing in Foreign Affairs, argues essentially that Washington cannot achieve better relations with the government in Moscow because Moscow believes that “Russia’s relations with the United States (and the West in general) [are] inherently unequal and conflictual and that Russia would better serve its interests if it followed its own course.”
According to this view, Russia defines its national security strategy primarily as anti-American and in zero-sum terms, thereby precluding meaningful cooperation.
For instance, Russia may have an interest in preventing Iran from acquiring nuclear weapons – but will not work with Washington to prevent that outcome because it is more threatened by a U.S.-Iranian rapprochement that would limit Russian influence in Tehran and threaten Moscow’s energy security strategy.
Writing in the Moscow Times after returning from a recent trip to Moscow, Amitai Etzioni also questions whether pressing the reset button is possible due to Russia and the United States’ vastly different priorities.
Clearly the Obama administration is willing to talk nicely toward Moscow – but whether it will be able to achieve significant policy breakthroughs remains an open question.
— Ben Katcher

The Washington Note on the Road
Guest Post By Jonathan Guyer: Mail For Kim Jong Il

18 comments on “Is it Possible to Press the Reset Button on U.S.-Russian Relations?”