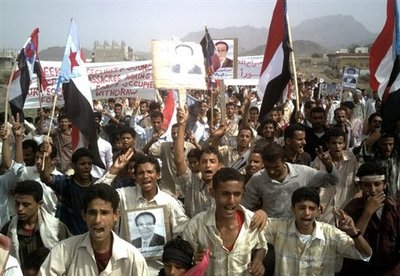 Tom Kutsch is a research associate at the New America Foundation/Middle East Task Force.
Two news items from Yemen yesterday – the kidnapping of a prominent Yemeni businessman, and the killings of 10 people in the city of Zahra – are the latest indications of growing violence and instability in a country already devastated by extreme poverty and sectarian disunity.
Yesterday’s events come after three foreign aid workers were found dead last month after having been taken hostage along with several other foreign humanitarians.
This growing instability within Yemen has worried Western governments and counter-terrorism hands alike primarily because of the vacuum it has created for a resurgent al-Qaeda. Although it was under reported at the time, the al-Qaeda threat was the proximate cause of EU Counter-Terrorism Coordinator Gilles de Kerchove’s warning last month that international failures to assist Yemen might result in the country becoming “another safe haven [for terrorism] or another Afghanistan.”
Under the leadership of Naser al-Wahishi, al-Qaeda has rebounded spectacularly from the defeats it suffered in the 2003-2005 period at the hands of the Yemeni central government (and its American benefactors) and has become more brazen and sophisticated in its extremism. Its ambitions are evidenced in part by the recent merger of cells in Yemen and Saudi Arabia, forming al-Qaeda in the Arabian Peninsula (AQAP).
Yet before Yemen invariably becomes the next country to have the ‘al-Qaeda terror state’ imprimatur thrust upon it, Western governments and regional actors in the Gulf must take the time to understand the complex dynamics at the heart of Yemen’s unique political crisis.
There are two political issues that threaten the stability of the Yemeni state: an ongoing insurgency against the central government by the al-Houthi tribe in the Northern Saada governorate; and the recurring unrest in the South that has persisted since the unification of South and North Yemen in 1994.
As Greg Johnsen (whose blog Waq Al-Waq is an invaluable resource for developments in Yemen) has argued, the central government in Yemen considers these issues, not al-Qaeda, to be the preeminent threats to its solubility.
These ‘stateness’ problems are compounded by, or perhaps derivative of, Yemen being the poorest country in the Arab world (development indicators put Yemen at close to sub-Saharan Africa levels).
The analogy to Somalia here is a tempting one. Beyond their proximity (they are separated only by the Gulf of Aden), Yemen, like Somalia, has a political apparatus predicated on tenuous clan and tribal loyalties, tremendous economic and social problems, irredentist claims that threaten the unity of the nation-state, illicit weapons smuggling activities, and, to top it off, the interests of outside parties with overarching regional rivalries.
Yet Yemen, unlike Somalia, still has a functioning central government, and thus any parallels should be employed only to contemplate what failed policies in the present might mean for the future.
In order to halt the inertia of ongoing chaos, it is essential that regional and international actors act intelligently. At the regional level, it is vital that Yemen sees its potential membership in The Gulf Cooperation Council (GCC) as something more than a pipe dream. This will require Saudi Arabia to use its leverage within the GCC to encourage a viable path to membership that would convince the Yemeni state to abandon any moves toward entrenching internecine conflict.
In addition to encouraging the Saudis and the GCC to support this path, the U.S., E.U. and other international stakeholders must provide the Yemeni state with the political, economic, and social investment that it so desperately needs. This will require international actors to abandon their al-Qaeda-centric lenses and to deal with Yemen on its own terms.
In a region awash with so many other priorities for Western and regional actors, it won’t be an easy sell for Yemen to start demanding our increased aid and attention, but the Middle East is full of examples aplenty of what happens when such stateness problems are dealt with only after the Rubicon has been crossed.
— Tom Kutsch

4 comments on “Guest Post by Tom Kutsch: The Silent Crisis Unfolding in Yemen”