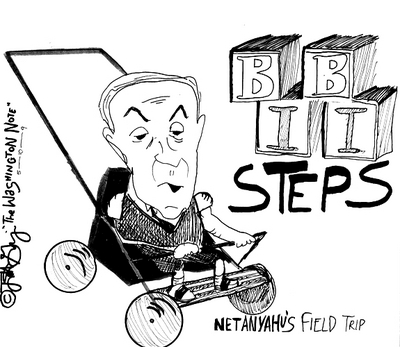 (Credit: Jonathan Guyer)
Jonathan Guyer is a Program Associate at the New America Foundation/Middle East Task Force.
Two weeks ago, Jordanian King Abdullah’s visit to the White House brought President Obama’s announcement that the Egyptian, Israeli, and Palestinian premiers would make field trips to Washington.
Since then, some analysts have suggested that Israeli Prime Minister Benjamin Netanyahu’s visit tomorrow may bring a confrontation between the hawkish Prime Minister and an Obama administration eager to distance itself from Israel.
Those who predict a row or showdown point to significant differences between the two leaders on Iran, settlements, and Palestinian statehood. But an early confrontation between the leaders – because of Netanyahu’s reluctance to say “two-states” or commit to limiting settlement activity in the occupied West Bank – would be a mistake.
During a White House press conference with the Jordanian monarch last month, Obama hinted at the role he thinks the US should take in the Israeli-Palestinian conflict:

Unfortunately, right now what we’ve seen not just in Israel but within the Palestinian Territories, among the Arab states, worldwide, is a profound cynicism about the possibility of any progress being made whatsoever.
What we want to do is to step back from the abyss; to say, as hard as it is, as difficult as it may be, the prospect of peace still exists — but it’s going to require some hard choices, it’s going to require resolution on the part of all the actors involved, and it’s going to require that we create some concrete steps that all parties can take that are evidence of that resolution. And the United States is going to deeply engage in this process to see if we can make progress.

Re-engaging in the peace process will take more than stepping away from the ‘abyss.’ Obama’s recipe for Middle East peace cannot only be the anti-Bush doctrine; it will need original thinking and sustained American leadership.
There are plenty of details Obama and Netanyahu could squabble over, but the priority should be to get the ball rolling on a comprehensive peace deal – an “everything for everything” scenario that normalizes Arab-Israeli relations.
President Obama is in a strong position. As United States Institute of Peace Associate Scott Lasenky says, “There is no incentive in Israeli politics to foster or sustain disagreements with Washington. Quite the opposite; Israeli leaders will go to great lengths to ensure smooth and tranquil ties.”
Rather than coming to blows with Netanyahu, Obama should take advantage of his strong position to provide a clear and simple message to Israel – ‘let’s make this deal deliver.’
— Jonathan Guyer