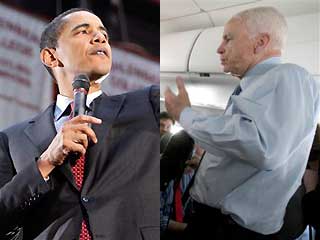 At the Center for a New American Security “Pivot Point: New Directions for American Security” conference Wednesday, the question was raised of whether the next president is likely to invest his political capital in the domestic or the international sphere.
It is clear from McCain’s lack of domestic policy proposals, his record in the Senate, and the way in which he has run his campaign, that as President he would spend his time and resources on international affairs. The question of where a President Obama would spend his capital is trickier.
The political climate favors focusing on domestic issues. This is due to both the current president’s excessive emphasis on foreign policy and the inevitable focus on the economy that accompanies a recession. Indeed, a recent poll indicates that a full two-thirds of Americans think that the economy is an extremely important issue, while fewer than one half of Americans attach extreme importance to Iraq.
That said, the next president will inherit two hot wars, an enormously complex and important change in the Asian balance of power, and an international community starved for proactive, positive American engagement. But with the consequences of a diminished American primacy more distant and less palpable to most Americans, pocketbook issues will likely prevail in guiding the agenda after the election.
As J.W. Kingdon’s Streams Model shows, the policy-making process involves the complex interplay of ideas, specific challenges, and the prevailing political context. In particular, the decision of where to invest political capital results from a combination of domestic politics, a president’s personal inclinations, and how events unfold.
President Clinton tilted toward domestic policy for all three reasons: the Democratic Party is traditionally stronger on domestic issues, the end of the Cold War seemed to provide an opportunity to address domestic challenges, and President Clinton was personally most interested in domestic issues.
President Bush successfully managed a turbulent transition in international affairs with the fall of the Berlin wall, the end of the Cold War, and the first Gulf War. But his neglect for domestic issues ultimately played into the hands of Clinton’s “It’s the Economy, Stupid” campaign.
President Reagan was a rare president who was able to implement both a domestic and a foreign policy agenda. This can be attributed to his immense political popularity as well his ability to articulate solutions to both the Cold War and the nation’s economic woes that resonated with the American people.
The case of the current president demonstrates the importance that events play in shaping the focus of a president’s term. While Bush will certainly be remembered as a foreign policy president, this was not necessarily his intention when he took office. Grover Norquist reminds us that Bush’s campaign speeches called for a humble approach to foreign policy in which America would lead by example rather than by empire. Furthermore, as Steve Clemons has argued, the events of September 11 allowed hardliners within his administration to win his “foreign policy soul.”
Matt Yglesias has suggested, Obama won the nomination in large part due to his opposition to the Iraq war and his call for diplomatic engagement with dictators, which allowed him to differentiate himself from Hilary Clinton. The issue most likely to compel Obama to focus on foreign policy is Iran – whether it is an escalation of hostilities, a decision to pursue a more robust diplomatic course, or the crossing of a nuclear red line.
Nevertheless, the criteria laid out above suggest that after an election, a President Obama would likely to tack back to domestic issues where he is stronger politically and where his background as a community organizer suggests that his passion lies.
— Ben Katcher