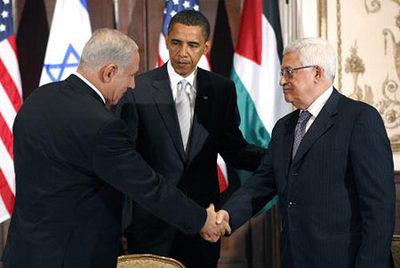 Amjad Atallah directs the New America Foundation/Middle East Task Force.
For the last 24 hours, Israeli Prime Minister Benjamin Netanyahu was basking in the glow of patriotic support by his most ardent right wing supporters for standing up to the United States at yesterday’s trilateral meeting. Prior to his meeting with President Obama and President Abbas, Netanyahu’s aides were bragging that he would tell both leaders to their face that he had no intention of implementing a settlement freeze.
Minutes ago, the glow ended.
President Obama just gave his speech before the world at the United Nations General Assembly and he made at least four things clear as far as Middle East peace is concerned.

Second-guessing in Israel will begin now, but it is too late. The President has just articulated United States’ goals to the world — goals consistent with those of almost every other nation — within the context of a speech reintroducing the United States as a global leader.
Time for the Israelis and Palestinians to begin dusting off all their permanent status plans that have been gathering dust for more than a decade.
Judge for yourself, I’ve pasted the excerpt here:

I will also continue to seek a just and lasting peace between Israel, Palestine, and the Arab world. Yesterday, I had a constructive meeting with Prime Minister Netanyahu and President Abbas. We have made some progress. Palestinians have strengthened their efforts on security. Israelis have facilitated greater freedom of movement for the Palestinians. As a result of these efforts by both sides, the economy in the West Bank has begun to grow. But more progress is needed. We continue to call on Palestinians to end incitement against Israel, and we continue to emphasize that America does not accept the legitimacy of continued Israeli settlements.
The time has come to re-launch negotiations – without preconditions – that address the permanent-status issues: security for Israelis and Palestinians; borders, refugees and Jerusalem. The goal is clear: two states living side by side in peace and security – a Jewish State of Israel, with true security for all Israelis; and a viable, independent Palestinian state with contiguous territory that ends the occupation that began in 1967, and realizes the potential of the Palestinian people. As we pursue this goal, we will also pursue peace between Israel and Lebanon, Israel and Syria, and a broader peace between Israel and its many neighbors. In pursuit of that goal, we will develop regional initiatives with multilateral participation, alongside bilateral negotiations.
I am not naÃƒÂ¯ve. I know this will be difficult. But all of us must decide whether we are serious about peace, or whether we only lend it lip-service. To break the old patterns – to break the cycle of insecurity and despair – all of us must say publicly what we would acknowledge in private. The United States does Israel no favors when we fail to couple an unwavering commitment to its security with an insistence that Israel respect the legitimate claims and rights of the Palestinians. And nations within this body do the Palestinians no favors when they choose vitriolic attacks over a constructive willingness to recognize Israel’s legitimacy, and its right to exist in peace and security.
We must remember that the greatest price of this conflict is not paid by us. It is paid by the Israeli girl in Sderot who closes her eyes in fear that a rocket will take her life in the night. It is paid by the Palestinian boy in Gaza who has no clean water and no country to call his own. These are God’s children. And after all of the politics and all of the posturing, this is about the right of every human being to live with dignity and security. That is a lesson embedded in the three great faiths that call one small slice of Earth the Holy Land. And that is why – even though there will be setbacks, and false starts, and tough days – I will not waiver in my pursuit of peace.

53 comments on “Guest Post by Amjad Atallah: The Other Shoe Drops — Obama Lays Out Goals for Middle East Peace at the UN”