Europe seems to have been caught giving a nod and a wink in the dark to the CIA policy referred to in media circles as ‘extraordinary rendition’. 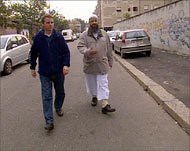 Fourteen European states colluded with the CIA in secret US flights ferrying terror suspects around the world, according a report published last week by Europe’s human rights watchdog.
The Council of Europe report states that the policy practiced by the CIA, which has become known as “extraordinary rendition”, could operate only with “the intentional or grossly negligent collusion of the European partners”.
Extraordinary rendition involves seizing terror suspects and taking them to third countries without court approval. There have been allegations some were tortured.
At the end of last year we made a documentary on extraordinary rendition. We discovered there appeared to be evidence that the Europeans knew more than they were letting on about the seizure and transport of citizens or suspects on their soil.

We filmed in Milan where in February 2003 an Egyptian terror suspect, known as
Abu Omar, was abducted as he walked down a street in the middle of the day. A witness saw 3 or 4 men bundle him into the back of a van which then drove off. It is believed Abu Omar was spirited away to Egypt where he was imprisoned and tortured.
Italian investigators conducted an investigation and ordered the arrest of 22 people they suspect are CIA agents who carried out the abduction.
The Italian government has consistently denied any complicity in Abu Omar’s abduction.
But this does not fit with the version of events described by former CIA analyst Michael Scheuer — widely regarded as the creator of the rendition policy in its current form. Scheuer has stated that the head of Italy’s SISMI military secret service authorized the abduction of Abu Omar. Scheuer told us in an on-camera interview: “The operation was approved by the Italians and probably requested by the Italians.”
Further suggestions of Italian complicity came from a local Milan policeman we interviewed who informed us that, prior to Abu Omar’s abduction, he had been involved in a well-planned surveillance operation of the Egyptian suspect. The policeman was surprised when an Italian magistrate suddenly stopped the surveillance operation. Just a few weeks later, Abu Omar was abducted.
“When we found out about the abduction of Abu Omar we naturally thought there had been two different plans in operation,” the policeman told us. “Our surveillance operation had been suspended because some other organization — either national or international — had already been working on the case.” The policeman told us he believed the CIA had taken over the Abu Omar case from the Italians — clearly with Italian consent.
There is also mounting evidence that Germany may have been complicit in the arrest of a German citizen called Khaled el-Masri.
Earlier this month it was reported that Germany’s external intelligence service, the BND, said it knew about the American seizure and detention of el-Masri sixteen months before the country was officially informed of his mistaken arrest.
El-Masri says he was abducted during a vacation in Macedonia on New Year’s Eve 2003 and taken weeks later to a U.S. prison facility in Afghanistan, where he said he was shackled and beaten. His crime was in having the same name as another Khaled el-Masri, a suspected Al-Qaeda member wanted by the Americans. Some months later the CIA realized they had the wrong man and he was released in a remote area in Albania.
El-Masri told us, in an exclusive interview, that during his captivity in Afghanistan he had been visited by a man called Sam. El-Masri explained that he believed Sam was a German intelligence official.
Europe has tried to distance itself from any suggestion of collusion with the Americans in their policy known as extraordinary rendition. It seems increasingly evident that there has been cooperation — however active or passive — veiled in a garb of plausible deniability. Such deniability is becoming increasingly tenuous.
Giles Trendle is the Senior Producer on Al-Jazeera’s flagship current affairs documentary programme entitled ‘Top Secret‘.