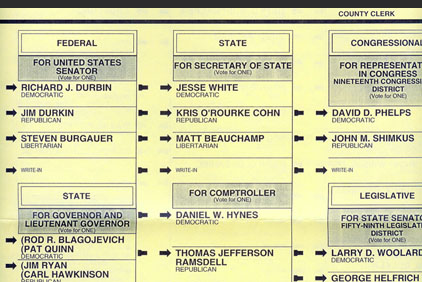 Just after the election, the realization of Governor Palin’s privilege to fulfill Senate vacancies drew gasps from liberal circles. The scenario that played out in the left’s collective fear involved Sarah Palin, who had been banished back to Juneau after losing, appointing herself to Ted Stevens’ seat, should the convicted felon win reelection. The thought was that the Senate Ethics Committee would likely refuse Stevens, thus opening the seat to Palin’s discretion.
Mr. Smith — err Mrs. Palin — sends herself to Washington.
Alas, such fears have been allayed, in part because Alaska state law requires that a special election be held to fill the seat, but mostly because Stevens lost the race.
But there are only several states, including Wisconsin, Oregon and Alaska, that have stripped the power of Senate appointment from their governors and returned it to their publics.
So why not? Would it be that complicated to have votes to replace Hillary in New York, Biden in Delaware and Obama in Illinois?
Voting machines are still practically warm from November’s go around.
I’m not sold on arguments that it would be too expensive and time-consuming of a process to have replacement elections. Each state party nominates a candidate; any third party candidates that can poll at a reasonable level can be included; have two debates, possibly a week apart, then hold elections before the end of January.
This isn’t a complicated process — and one that Illinois is already looking at to replace Rahm Emanuel. So why not Illinois; but, more importantly, why not everywhere?
This is one of the intricacies of our democracy that high schoolers stumble upon with disbelief. As unbelievable as Governor Blago’s auction, is that we still have this system in place.