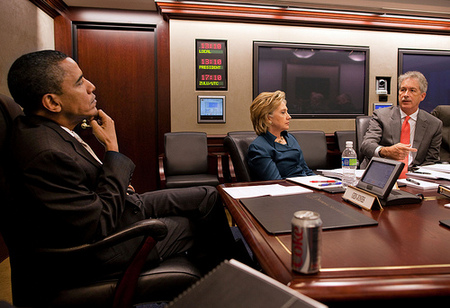 (Photo Credit: White House)
Lawmakers from both sides of the aisle are insisting that if only Congress could dream up better and more effective sanctions to squeeze Iran and get Russia and China to go along, then the Iranian nuclear problem would go away.
This is nonsense. Even if we are to put aside the extreme unlikelihood that either China or Russia would jeopardize their relations with Iran to support “crippling” American-led sanctions, the fact remains that the Iranians have simply staked too much of their political legitimacy on their nuclear program, and have reached a point of no return.
As Flynt Leverett and Hillary Mann Leverett explain in Politico today:

Based on conversations with senior Iranian officials under the reformist Khatami and conservative Ahmadinejad administrations, we are convinced that no Iranian government with any popular legitimacy will agree to abandon enrichment inside Iran. Furthermore, no Iranian government will agree to “suspend,” or otherwise seriously limit, enrichment activities as a confidence-building measure. The Khatami government did this from 2003 to 2005 and got nothing in return. In contrast, by continuing to develop Iran’s enrichment capabilities, Ahmadinejad has created “cards” to play with the international community: e.g., proposing to send LEU abroad for value-adding additional processing.

The best that threatening and implementing sanctions can do is to kick the nuclear issue down the road while worsening the already abysmal relations between the United States and the most powerful country in the Middle East.
Rather than waving hollow sticks, the Obama administration should seek a wide-ranging, game-changing agreement with the Iranians that goes beyond nuclear issues and addresses both the United States’ and Iran’s core security interests.
As the Leveretts point out in their piece, “the key questions for Obama are: What is the “grand bargain” he is prepared to propose for Iran, and does he have the political nerve to prepare the American public for what that entails?
— Ben Katcher

113 comments on “Imposing More Sanctions On Iran Will Not Work”