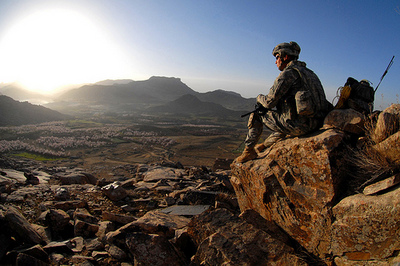 Former CIA Counterterrorism official Paul Pillar has an important op-ed in today’s Washington Post that questions whether terrorists really need “safe havens” after all.
Pillar challenges one of the key assumptions underpinning the escalation of America’s involvement in Afghanistan – the notion that preventing a “safe haven” for terrorists in Afghanistan is one of the best ways to prevent future attacks on the American homeland.
From Pillar’s piece:

Instead, the issue is whether preventing such a haven would reduce the terrorist threat to the United States enough from what it otherwise would be to offset the required expenditure of blood and treasure and the barriers to success in Afghanistan, including an ineffective regime and sagging support from the population. Thwarting the creation of a physical haven also would have to offset any boost to anti-U.S. terrorism stemming from perceptions that the United States had become an occupier rather than a defender of Afghanistan.
Among the many parallels being offered between Afghanistan and the Vietnam War, one of the most disturbing concerns inadequate examination of core assumptions. The Johnson administration was just as meticulous as the Obama administration is being in examining counterinsurgent strategies and the forces required to execute them. But most American discourse about Vietnam in the early and mid-1960s took for granted the key — and flawed — assumptions underlying the whole effort: that a loss of Vietnam would mean that other Asian countries would fall like dominoes to communism, and that a retreat from the commitment to Vietnam would gravely harm U.S. credibility.
The Obama administration and other participants in the debate about expanding the counterinsurgency effort in Afghanistan can still avoid comparable error. But this would require not merely invoking Sept. 11 and taking for granted that a haven in Afghanistan would mean the difference between repeating and not repeating that horror. It would instead mean presenting a convincing case about how such a haven would significantly increase the terrorist danger to the United States. That case has not yet been made.

Clearly, preventing terrorist attacks on the American homeland should be a priority of the U.S. government. Terrorist attacks kill innocent civilians and spread fear that is harmful to our nation’s economic and psychological well-being.
But we need to have a sober, fear-free, post-post-9/11 discussion about the best ways to use our limited resources to prevent terrorist attacks while pursuing our other national objectives.
I think Pillar’s piece raises an important element of that conversation.
You can read the entire article here.
— Ben Katcher

42 comments on “How Much Do Terrorist “Safe Havens” Matter?”