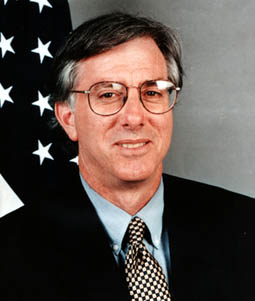 Recently, Politico issued a roster of top policy and political hands who would be in line for key positions in an Obama government.
At the time, I thought it very odd that Clinton Middle East coordinator Dennis Ross was not on the list. Ross was rumored to be one of the four competing to be national security adviser to Barack Obama — along with James Steinberg, Susan Rice, and Gregory Craig.
Now we know that General Jim Jones will be National Security Adviser. Former Warren Christopher aide Tom Donilon will probably be his deputy. Jim Steinberg will be Deputy at Hillary Clinton’s Department of State, and Susan Rice will be the second Ambassador to the United Nations to follow the destructive tenure of the recess-appointed John Bolton.
But Dennis Ross has still not been selected for anything yet — and his visibility has been low (well except for this disturbing “let’s bomb Iran now and get it over with” report). There aren’t a lot of rumors about him — and there should be. He’s an accomplished diplomat who should be in the mix somewhere — but not just anywhere.
Ross is much more hawkish on Iran than I am. While I’m impressed with his ability to simultaneously sell conflicting themes — like on one hand he wants to bomb Iran and undermine any engagement with Hamas while on the other he desires the sort of dovish position advocated by Search for Common Ground — Dennis Ross is much more comfortable with neoconservatives than realists or liberal internationalists.
Dennis Ross, who I enjoy at a personal level and who I like to debate, is nonetheless part of the never-ending Middle East peace business in the country, and that is a business that needs to be put out of business.
Ross is close to the Washington Institute for Near East Policy and to the American Israel Public Affairs Committee. He would make an excellent U.S. Ambassador to Israel. Much better an Ambassador there — than someone tasked with negotiating with Iran or trying to broker the birth of a viable Palestinian state.
Two of Ross’ closest associates are Robert Satloff and James Woolsey — and neither of these two believe in assembling all of the key stakeholders in the Middle East that are needed to stabilize Iraq, get Iran on a new track, and establish a viable, successful Palestine next to a secure Israel.
Until the leaks about Susan Rice’s appointment to serve American interests in the United Nations, I thought Ross would be a good shoe-in there as well.
And then I heard someone saying what I thought on TV today.
Zbigniew Brzezinski was on MSNBC’s Morning Joe talking with a panel of folks, including his daughter Mika Brzezinski, about his co-authored book with Brent Scowcroft and David Ignatius (which I had a hand in initiating and sponsoring) and about moving in a more productive direction in the Middle East.
Brzezinski said that after Obama made some clarifying statements about his objectives in the Middle East, he should appoint people to help achieve his goals.
Zbig dropped some names — some big ones….and I liked how he did it.
He said hypothetically, Colin Powell could be the person asked to do the broad negotiating and arm twisting to achieve the Obama administration’s foreign policy objectives with Iran and in Arab-Israel peace negotiations.
Brzezinski then said that Dennis Ross would make an excellent and important US Ambassador to Israel.
I think he’s right — and it’s time to start whispering about Ross’s fate again and get him back in the mix as envoy to Tel Aviv — but not as czar of Middle East negotiations. With Jim Jones, Bob Gates, and others in the mix — that would be paralyzing.
But Colin Powell, Chuck Hagel, Richard Lugar, or even Richard Armitage — those could be smart and interesting choices.
— Steve Clemons

Robert Gates: Should We Want Him to Stay?
Americans Should Get Assurances on “Offshoring” in Citibank Bail-out