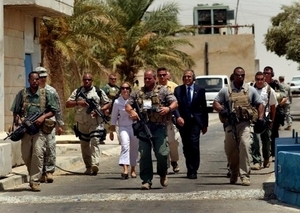 Over the past five years, the ongoing U.S. military conflicts in Iraq and Afghanistan have brought to the fore a host of challenges affecting America’s armed forces. Few, however, have taken on greater prominence and touched on a wider array of management and oversight issues than the role of private security, military, and contingency contractors in the battle space. With a new Administration planning to take office a comprehensive review of the policy decisions that brought 230,000 private military contractors to Iraq and Afghanistan, in support of the U.S. missions there, is long overdue.
The New America Foundation’s Privatization of Foreign Policy Initiative has brought together experts from across the political and policy spectrum for a discussion about the specific challenges presented by private security and contingency contracting. Their latest report, Changing the Culture of Pentagon Contracting examines the relationship between U.S. government agencies and private security, military, and contingency contractors and offers recommendations for managing this relationship in the future. The recommendations presented here are aimed at informing policymakers, both in the executive and legislative branches as well as the uniformed military, as they develop solutions to the growing challenge of effectively integrating private contractors into U.S. national security operations.
The New America Foundation will be hosting an official report release event Friday at 9:30 am. Michael Cohen, co-author of Changing the Culture of Pentagon Contracting, will be joined by military affairs columnist David Isenberg, former JAG Corp Counsel Tara Lee, and human rights lawyer Kevin Lanigan to discuss and debate the report’s findings and recommendations.

Changing the Culture of Pentagon Contracting offers recommendations for the next administration, lawmakers, and military strategists to utilize private military contractors for the good of US military and foreign policy while limiting those that would be detrimental to our presence in the world.
The U.S. government should:
-Begin to transition away from the use of private security contractors in the battle space and build up the capabilities of the State Department’s Bureau of Diplomatic Security and the military police to take on security responsibilities. As this transition takes place, the Military Extraterritorial Jurisdiction Act should be expanded to govern the actions of private security contractors in Iraq and Afghanistan not currently covered by the Uniform Code of Military Justice; improved training of security contractors, vetting of third-country nationals, and third-party accreditation of contractors should be instituted; and interagency coordination between the military and other government agencies should be strengthened.
-Move away from reliance on the flawed and widely misunderstood term “inherently governmental” in deciding how and when to use private contractors, and instead focus on the question of core competencies and mission success. Congress should permit government agencies to use broad discretionary leeway in determining where and how contractors should be used. Congress should establish red-lined activities that must not be outsourced and require the military to maintain a “resident capacity” for any function it outsources, particularly as it relates to the ability to conduct proper contractual oversight.
-Designate a high-ranking official in each branch of the military to conduct a top-to-bottom review of how that branch interacts with contractors and where there are areas for greater or lesser reliance on contractors.
-Strengthen the contractor and acquisition workforce so that it is better equipped to make contracting decisions and to conduct robust oversight and management of contractors. In addition, the Army should develop and support its newly created contracting career field for enlisted personnel and officers.
-Create a clear chain of command from Secretary of Defense through the Joint Chiefs of Staff and service departments that lays out the responsibilities for contracting and holds commanders accountable for the integration of contractors into the Total Force.
-Integrate contractor oversight into officer training in all branches of the military.
-Include contingency contracting as an “area of emphasis” in the 2010 QDR.
-Create and sustain an enforcement arm of the FBI to conduct overseas investigations of private contractors as well as an extraterritorial U.S. attorney to prosecute criminal behavior.
–Faith Smith

24 comments on “Changing the Culture of Pentagon Contracting”