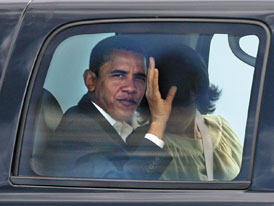 I just received the near final draft of the Democratic Party platform (pdf here) — and I have to say that it gave me goosebumps, the good kind. I have been giving Senator Obama a tough time on a few issues lately — but he and his team have gained major mileage and traction with me with such an enlightened roster of policy convictions.
I don’t agree with all of it, and I’ll nitpick here and there another time as everyone will — but the broad parameters of this document are uplifting, feel real, and from a distance as well as up close, the prescriptions drafted here are clearly about rebuilding a “high-trust world” at home and abroad in contrast to the “high-fear world” that Bush and Cheney have wrought and which John McCain (regrettably) seems fixated on perpetuating.

Karen Kornbluh — my former colleague at the New America Foundation is author of two of the best articles I have read in recent years, “The Mommy Tax” and “Disconnect” (about America’s broadband policy) — has been serving as Senator Obama’s policy director in the Senate. Kornbluh recently became “Principal Platform Author” at the Democratic National Committee and worked closely with Arizona Governor and Platform Committee member Janet Napolitano who according to sources is the Democratic Party’s real policy deal-maker. I have had several calls about Kornbluh and Napolitano tonight and how they put together a high-flex, no nonsense, no-ego-of-their own product that few others could have produced.
I have read through much of the platform — but not all. Some of the key zingers are a focus on technology and taking back the government and getting more democracy per se via technology. There is a focus on service, on faith-based efforts — a focus on citizen stakeholding.
And what I love most about the platform is that it started with a focus on what we need to do in America as Americans — and not necessarily on the wars and conflicts in which war are embroiled abroad. The Iraq and Afghanistan Wars do demand our attention – as do many other international challenges — but the defining challenges are here and should be addressed. The platform starts with these, and that is refreshing.
I look forward to discussing this more in future days — but I link the platform draft here for your own perusal.
— Steve Clemons

20 comments on “Building a High-Trust World: Obama and the Democratic Platform”