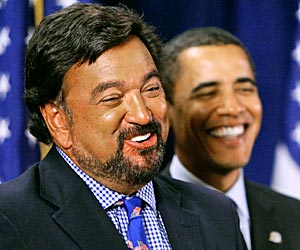 I only have time for a short comment as I’m heading to the airport to fly to Europe, but Commerce Secretary nominee Bill Richardson has withdrawn from his appointment because of an ongoing grand jury investigation into whether he traded New Mexico government contracts for campaign contributions.
Here are the statements from Barack Obama and Bill Richardson:

STATEMENT OF PRESIDENT ELECT BARACK OBAMA
It is with deep regret that I accept Governor Bill Richardson’s decision to withdraw his name for nomination as the next Secretary of Commerce.Governor Richardson is an outstanding public servant and would have brought to the job of Commerce Secretary and our economic team great insights accumulated through an extraordinary career in federal and state office. It is a measure of his willingness to put the nation first that he has removed himself as a candidate for the Cabinet in order to avoid any delay in filling this important economic post at this critical time. Although we must move quickly to fill the void left by Governor Richardson’s decision, I look forward to his future service to our country and in my administration.
STATEMENT OF GOVERNOR BILL RICHARDSON
For nearly three decades, I have been honored to serve my state and our nation in Congress, at the U.N., as Secretary of Energy and as governor. So when the President-elect asked me to serve as Secretary of Commerce, I felt a duty to answer the call.I felt that duty particularly because America is facing such extraordinary economic challenges. The Department of Commerce must play an important role in solving them by helping to grow the new jobs and businesses America so badly needs.
It is also because of that sense of urgency about the work of the Commerce Department that I have asked the President-elect not to move forward with my nomination at this time.I do so with great sorrow. But a pending investigation of a company that has done business with New Mexico state government promises to extend for several weeks or, perhaps, even months.
Let me say unequivocally that I and my Administration have acted properly in all matters and that this investigation will bear out that fact. But I have concluded that the ongoing investigation also would have forced an untenable delay in the confirmation process.Given the gravity of the economic situation the nation is facing, I could not in good conscience ask the President-elect and his Administration to delay for one day the important work that needs to be done.
So, for now, I will remain in the job I love, Governor of New Mexico, and will continue to work every day, with Lieutenant Governor Diane Denish, to make a positive difference in the lives of New Mexicans. I believe she will be a terrific governor in the future.I appreciate the confidence President-elect Obama has shown in me, and value our friendship and working partnership. I told him that I am eager to serve in the future in any way he deems useful. And like all Americans, I pray for his success and the success of our beloved country.

So, that’s the second person who didn’t make it through the process. Penny Pritzker was the first in line, but she also removed her name.
I think that the Obama team needs someone who understands the economy and the vital need to reinvest in high wage job growth creation, who understands the importance of redesigning America’s domestic social contract between labor, firms, capital and government, and who is familiar with business — and liked by labor.
There are very few who fit that bill, and Leo Hindery — who was senior economic advisor to the John Edwards campaign and then was an economic advisor to the Obama campaign as well and authored the interesting book It Takes a CEO — is a real stand out who the Obama team should consider for Commerce.
— Steve Clemons

TWN on the Road
Watching Death Day and Night So Close By. . .