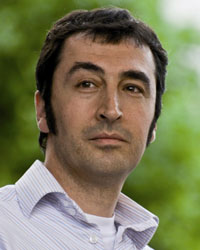 Congratulations to Cem Oezdemir who has been elected co-chairman of the German Green Party. It’s the party’s top political post. His victory makes him the highest-ranking German politician of Turkish descent. Turkish immigrants and their descendants number more than 2.5 million and make up 3% of Germany’s total population.
I woke up Sunday morning in my hotel in Istanbul to find this article on the front page of the Turkish Daily News, the most popular English language daily here.
The article explains how Oezdemir employed many of President-elect Obama’s campaign tactics.
In addition to the obvious parallel between Oezdemir’s Turkish roots and Obama’s African heritage, Oezdemir has utilized facebook to mobilize young German voters, and his supporters are employing the slogan ‘yes we Cem.’
It mirrors a New York Times article I’m sure many of you saw Friday, pointing out the similarity between Benjamin Netanyahu’s Web site — in terms of color, font, layout, etc — and the Obama campaign page.
I just thought I’d share this tidbit, which I think demonstrates the revolutionary nature of Obama’s campaign as well as the popularity that America’s next president enjoys throughout the world – at least for now.
By the way, Steve Clemons is at the Green Party convention in Erfurt, Germany and as I understand through the grape vine, was out celebrating with Oezdemir as I write this.
— Ben Katcher

Andrew Bacevich Comments on Self-Damaging Wars, the Absence of Strategy, and Dangerous Leadership
‘Renegade’ and ‘Renaissance’. . .Better Than ‘Maverick’ and ‘Medieval’