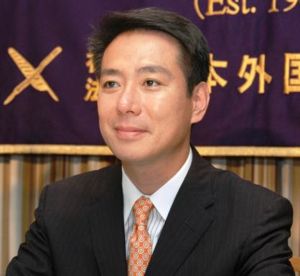 Former Democratic Party of Japan President (and now Vice President) and a likely Minister of Foreign Affairs or Minister of Defense in a future DPJ-led government Seiji Maehara gave a long but still fascinating speech at Smith & Wollensky’s in Washington Thursday evening. The organizers were Japan’s Ocean Policy Research Foundation and the Sasakawa Peace Foundation.
While the jingle of the OPRF may be to “promote co-existence between man and the ocean,” my sense after attending this big dinner is that that’s true as long as it involves maintaining a very large, high edge naval fleet.
I found Maehara, who is a genuine Japanese political star today, to be very well informed and not as dogmatic as I expected on issues like Japan’s emotionalism over abductees in North Korea vs. responsible participation in the Six Party Talks.
But after listening to Maehara refer a number of times to Japan’s leadership in nuclear non-proliferation efforts around the world, I asked a question about what he thought Japan should be doing, if anything, about responding to nations like Iran and other potential nuclear break-out nations down the chain who privately say that they don’t want nuclear weapons (which Iran still claims) but that they want a full fuel-cycle nuclear capacity within their borders — like Japan’s.
My sense is that Japan has been quiet about the fact that its plutonium reserve profile is unlike any other nation in the world — and that it is a bit of an outlier when it comes to thinking through a global system of nuclear energy supply through international management structures for nuclear power nations.
Apparently I hit a nerve — not with Maehara who had a smart and detailed answer — but with others in the room as a rather gruff defense industry contractor and long term Navy guy blustered and peppered me rudely during Maehara’s comments with questions about where my funding came from and where I developed the basis for my question. He said that in his 40 years in this business, he had never heard anyone shape a question the way I did and believed that I had to be a “plant” for some other interest group.
LOL — this was just too funny not to share.
Well, to tell the full truth — this question evolved from my own reading of an MIT report some years ago that I came by during my very first meeting with the then-MIT based Paul Krugman. The report, authored by a different MIT scholar, Eugene Skolnikoff, and commissioned by the Japanese government suggested that Japan’s nuclear energy program had a dual use profile that would only make sense if also trying to maintain a potential weapons capacity. I first saw this report in about 1996.
Then, a senior ranking Governmet of Japan Ministry of Economy, Trade, and Industry official spoke to me privately during the George W. Bush administration that he worried that efforts to create new international rules regarding nuclear energy and fuel — in order to deal with Iran and other potential nuclear powers — would undermine Japan’s system.
So, with all due respect to the huffy contractor — either begin thinking beyond the talking points being fed to you by your DoD handlers. . .or get out a bit more.
But then Seiji Maehara gave a quite intriguing response to my question.
Maehara said that he visited in Japan three nuclear facilities and was surprised to see that all of them were under IAEA supervision, that there were parts of the facilities that were completely off limits to Japanese staff, and that there were seals and inspection systems that they monitored throughout the facility.
Maehara continued that Japan would support the spread of nuclear capacity and nuclear production — modeled in the same way Japan’s nuclear template was organized — if the same protocols of IAEA inspection and management were embedded in the system.
Fascinating. So, what we heard from the person who may very well be a next, or next/next Minister of Defense or Foreign Affairs — and who I think will one day be Prime Minister — is a flexibility that would allow Iran to continue a nuclear program, maintain domestic plutonium feeds of its own, as long as it made inspections the law of the land.
This is exactly what former Iran President Mohammed Khatami suggested we initiate with the Iranian government a few years ago — though Khatami suggested that we propose limiting Iran’s reprocessing program to “experimental level” and not “industrial.”
One attendee at the Japan dinner — an unnamed Japanese official who I like a lot and respect — scribbled a funny note to me in response to my question:

Nobody knows. . .
We [Japan] may become like Iran.
We don’t have to as long as the US gives us good deterrence though!

The number of syllables are off — but it’s almost haiku.
— Steve Clemons