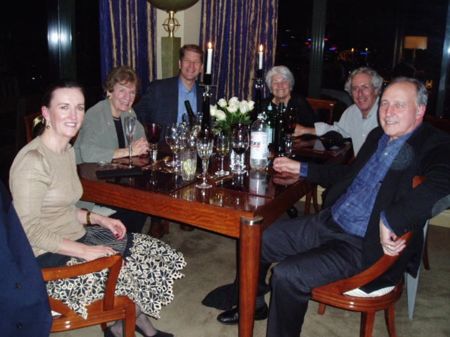 (post-2007 Australian American Leadership Dialogue Dinner: Anne Keating, Anne Wexler, Steve Clemons, Lesley Russell, Bruce Wolpe, Former Prime Minister Paul Keating; photo credit: Ambassador Joe Duffey)
A number of readers have been asking me how a typical day of mine in blogland and the the world of think tanks goes in Washington.
The most difficult challenge I have in my schedule is just getting time to “think.” The DC political scene is very time-consuming, wrapped up in meetings that I’m attending or hosting. There’s so much that I read each day or run across that I want to blog about — so I’m constantly scribbling, building a huge file of envelopes, napkins, the backs of flyers that I write on and then stuff in a folder hoping to one day get to in a future essay or blog post.
But over the next few days, I’m participating in the Australian American Leadership Dialogue — which corrals a powerhouse group of Australian political and business leaders with an equally high end crowd of Americans. An Australian political bridge-builder named Phil Scanlan on the Australian side and Anne Wexler and former USIA chief Joe Duffey among others helped launch this annual meeting 16 years ago — and I feel fortunate to be part of it.

We start out this morning with a meeting in the White House with Vice President Cheney. One of my colleagues in the meeting plans to ‘try and ask’ about Iran and whether the VP is egging on an Israeli bombing run. All of our meetings are off the record so I’m not sure I’ll be able to report back on Cheney’s answer.
But as far as pre-Cheney stuff goes, at 5:30 am, I went for a short run — now (at about 6:30 am) I’m blogging a bit, finishing up something I’ll post later on VP selection gossip. Then I head to the White House for the Cheney meeting. Then after that, political pollster Charlie Cook of National Journal’s Cook Political Report will handicap the upcoming political race for our group — and while I will be listening, I’ll be sending out emails quietly to friends who are invited to attend a session I’m having tomorrow with former YES Network CEO Leo Hindery who also served as John Edwards’ senior economic policy adviser on the campaign. Hindery will be speaking along with finance expert Tom Gallagher of the ISI Group and me on the impact of high energy prices and collapsing home values on the American middle class. Hindery will also be talking about his concern about growing dependencies on sovereign wealth funds.
But back to Australia-US stuff. Wait. . .not yet, I have to skip out of the conference for 90 minutes to attend a lunch hosted by British Ambassador Nigel Sheinwald for the blog-respecting head of communications at the Embassy, Dominic Martin. Martin is about to become the UK’s next Ambassador to the OECD, and he’s the guy who convinced Foreign Minister and blogger David Miliband to come speak recently at a joint event of the New America Foundation and British Council — launching a new transatlantic young leaders group called TN2020.
Then back to Australia-US chat. One of Brent Scowcroft’s right hand people, Kevin Nealer, will talk about China and the Asia Pacific economy (and I’ll probably still be emailing for the Leo Hindery/Tom Gallagher meeting). Then I have to sneak out and finish writing an article for a Japanese newspaper — shouldn’t take long.
Tonight, we are having a pretty fancied up dinner at the State Department in the Benjamin Franklin Room — and I’ll take a call from Deborah Cameron, the host of one of Sydney’s most listened to radio talk shows (702 ABC Sydney) to talk about American politics — something I do every Tuesday night (DC time — Wednesday morning Aussie time).
Then, I’ll go home and read, write, check in with everything on the home front. Then I’ll check in to see how the battles are going in TWN‘s comment files. There are some doozies there some time, but I tend to intervene only when the discourse finally gets as bad as what I hear in back rooms between some Members of Congress and their operatives.
Lots going on. This is a bit loaded for a normal day — but it may give folks of some idea of the pace of things. And while most folks outside DC might wonder why I’m not breaking out in hives going to hear Vice President Cheney speak to us this morning — the bottom line in DC is engaging all sides of the political and policy arena. I’m interested in what the Vice President has to say and how he is posturing on some of the big challenges ahead. In this town, it makes no sense to cut off communication with anyone. Listening, meeting, debating, and even attacking depends on knowing what all sides are up to.
More later.
— Steve Clemons