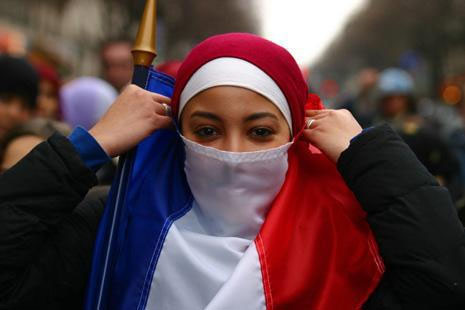 In the two weeks since French President Nicholas Sarkozy condemned the all-enveloping burqa or niqab garment as a sign of the “subjugation” and “debasement” of women, words have flown in France as well as Britain and the United States about the proper extent of religious practice in public. In this vein the French National Assembly convened a special commission last week that will investigate for six months and recommend whether or not to ban the burqa in France.
Arguing for the ban, a Muslim woman, Mona Eltawahy, wrote in the New York Times that the burqa served to erase women from the public sphere. She further wrote that many in Europe or America were afraid to speak out against the burqa, a silence that would “sacrifice women at the altar of political correctness.”

While I agree with many of Eltawahy’s points as well as her severe distaste for the burqa, banning an article of clothing is not just a question of political correctness but an infringement on personal rights. A potential ban raises questions about government interference with individual behavior in a public space.
Debate on this issue also took on another dimension for France after Al Qaida in the Islamic Maghreb (AQIM) threatened action in France in response to any effort to ban the burqa. Formerly known as the Salafist Group for Preaching and Combat (known by its French acronym GSPC), AQIM changed its name and pledged allegiance to Osama bin Laden in 2003; Al Qaida deputy Aiman al-Zawahiri “accepted” the group into Al Qaida in 2006.
I fear that any ban could legitimize fringe groups like AQIM. On the one hand, AQIM poses a real threat; AQIM has violently attacked or kidnapped soldiers and tourists across North and even into West Africa, and bombed the UN office in Algiers. According to some analysts they also inherited the European networks of the Armed Islamic Group, or GIA, an unspeakably violent organization that massacred tens of thousands in Algeria and bombed the Paris Metro during the Algerian Civil War of the 1990’s.
Yet the group’s appeal, reach and sophistication remain limited, as demonstrated by the January outbreak of bubonic plague in an AQIM camp. AQIM has attacked westerners and international organizations, but has shown no ability to act outside of Africa. Furthermore, there is scant indication of support for AQIM in Muslim communities in France, despite worries about the increasing radicalization of Muslim populations in crowded suburbs and prisons alike.
But movements like the one to ban the burqa could alter this isolation of extremists in France.
Despite the very limited number of Muslims wearing the burqa and the fact that the burqa is neither required nor traditionally worn by Muslims outside of Afghanistan and Pakistan, many French Muslims have already interpreted any potential ban as an attack. The website for the French daily Le Monde has a comment board about this issue, entitled, “In France, liberty for everyone except Muslims!” after one poster’s message. Another commenter spoke out against the burqa, but still concluded that a ban would be counterproductive, and would only lead to more religious extremism in France, not less.
This is not to say that a ban on the burqa will bring about a groundswell of support for groups like AQIM. But France and other countries cannot put aside their principles due to security concerns or appear to use the law to discriminate against Muslims. Such policies will have dire consequences for Muslim integration in Europe and for the continued struggle against insurgent and terrorist groups that feed off of popular discontent and perceived hypocritical actions of Western governments.
— Andrew Lebovich

68 comments on “Conflict Brewing Over the Burqa in France”